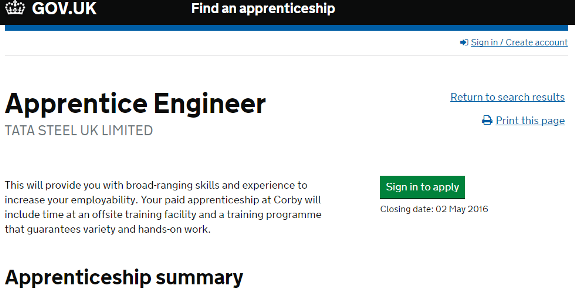 An advert has appeared on a government website for an apprenticeship vacancy with Tata Steel — even though the troubled firm wants to sell-off all its UK operations.

It was posted on the gov.uk ‘Find an apprenticeship’ site four days ago, inviting applications for a four-year advanced level course starting in May this year.

Yet the Indian-based company sparked widespread concern for around 15,000 jobs after announcing plans to sell-off its British operations, including the country’s largest steelworks at Port Talbot, at the end of March.

Tata declined to say today how many apprentices’ jobs were under threat when questioned by FE Week, or explain why the advert for the new post still went live when it wanted to sell-up.

But a spokesperson from NITAL, the training provider for the advertised apprentice engineer post, said: “Although there is a certain amount of uncertainty around Tata Steel, we have to carry on as usual —that’s really what we have got to do.

“If everything is resolved and nothing has been done about the apprenticeships that will be a problem.

The advanced level apprenticeship advert indicated that the post would improve applicants’ “employability”.

The weekly wage was listed as £294, and the scheme was also said to initially include “full time attendance at an offsite training facility supported by a Tata Steel bursary”.

It added: “Typically on completion of your apprenticeship, you will join an existing engineering team as an engineer team member.

“From there you could progress to team leader and later upwards to become a process engineer.

“The breadth of the organisation means that there are always opportunities to take advantage of.”

Although Tata, which is reportedly losing £1m a day on its UK operations, declined to comment directly on the advert or wider prospects for its UK apprentices, a spokesperson told FE Week: “From employees’ perspective, it’s very much business as usual.

She added that there was “an urgent need to show improvement in the UK business in order to make it as attractive as possible to a prospective buyer”.

“A process has now started for exploring opportunities for a strong future beyond Tata Steel, which has reluctantly concluded it has taken its UK operations as far as it can,” she said.

“It’s important we avoid any overreaction, either from employees or our customers and suppliers.”

The Department for Business, innovation and Skills was unable to comment ahead of publication on the apprenticeship advert, but said it was “doing everything it can to help the industry secure a long-term viable future”.

“Our absolute priority is to look after the workers and wider community as we work with Tata to find a viable long-term solution,” the spokesperson added.