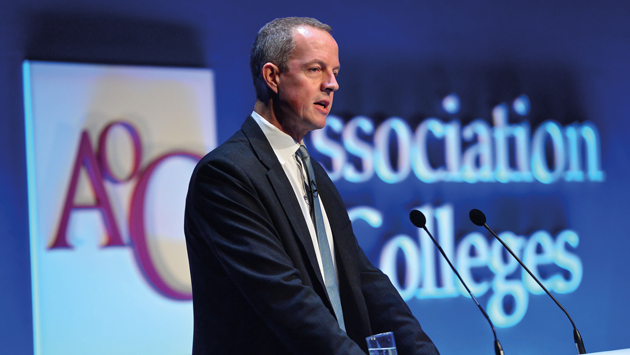 Skills Minister Nick Boles has confirmed that consultancy grants of £50k or £100k will be available to support colleges to implement area review recommendations, in a letter sent to all colleges and training providers ahead of the Easter break.

The letter is the first written confirmation from the government that the cash, which was first revealed by FE Week following a presentation by the Skills Minister at an Association of Colleges (Aoc) event on March 2, is on offer.

“We are putting in place a support package to assist you with implementing the reviews’ recommendations,” Mr Boles wrote in the letter.

“At the AoC event, I announced that we will provide £50K or £100k of transition grant funding for each substantive area review recommendation to support colleges in accessing the skills and capacity needed,” he continued.

The letter, sent to all chairs and principals of FE and sixth form colleges and chief executives of independent training providers on March 24, gives an update on the government’s FE reforms, including apprenticeships and the area reviews.

Mr Boles wrote that he was “pleased with the way in which you have responded to the challenge” of the area review process, and that he was “hugely encouraged that the first wave is starting to produce the kinds of outcomes we envisaged”.

The updated area review guidance, published on March 1, included “lessons from the early reviews”, Mr Boles wrote, the most “critical” of which was the need for colleges to “engage fully and honestly with each other and local stakeholders early on”.

In order to provide the support that colleges need “to deliver this new landscape”, the Skills Minister wrote, the government was “putting in place a support package to assist you with implementing the reviews’ recommendations”.

This package would include the consultancy grants and the £500m restructuring facility, which FE Week previously reported on.

“I should stress, however, that these funds are time-limited and colleges will need to make the most of this opportunity now to achieve the strength and stability required for the long term,” Mr Boles warned.

While not part of the area reviews, independent training providers will “need to be aware of the shifting landscapes in their local area and of wider developments”, he wrote.

These include the work, led by Lord Sainsbury and currently being finalised, on “reforming the technical education system”, which Mr Boles said he expected would be “making ground-breaking proposals”.

Mr Boles’s letter also referred to two announcements in the recent Budget – the 10 per cent levy top up for companies paying the apprenticeship levy, and four more devolution deals for West of England, East Anglia, Greater Lincolnshire and Greater Manchester.

Mr Boles also thanked colleges and providers for making National Apprenticeship Week a success. There were more than 30,000 new apprenticeship pledges during the week, which Mr Boles said was “the highest ever NAW total”.