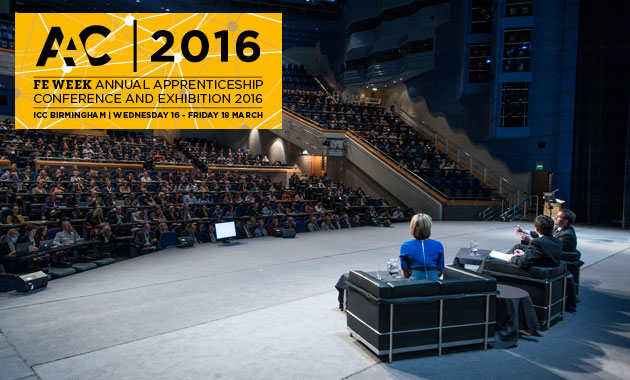 With speakers including sector leaders, key civil servants, government advisers, awarding bodies and apprentices themselves, the conference covered just about every aspect of the apprenticeship programme – except, perhaps, concrete answers from the government on some of the big questions.

David Hill, the first of two Department for Business, Innovation and Skills (BIS) representatives, opened the event with an overview of the government’s reforms. His colleague, Keith Smith (pictured left), the newly appointed head of levy implementation at BIS, revealed a few more tantalising glimpses of how the levy system – the cornerstone of the apprenticeship reforms – would operate.

The levy system will “change how you do business”, Mr Smith said, with providers contracting directly with employers and no longer able to rely on the Skills Funding Agency (SFA) to give them certainty over their budgets.

More detail would be available in April, Mr Smith said, including “a bit about how the system is going to work for those small businesses, and how we see the service for small business developing over time”.

However, some of that detail came a little earlier than April – at the end of the second day, to be precise.

During a Q&A session Nadhim Zahawi (picture below), co-chair of the apprenticeship delivery board, dropped the bombshell that only levy-paying companies will have access to the new funding system when it is launched in April 2017. “The core offering that we will be launching in April 2017 will effectively be delivering the levy for the two per cent levy payers, while maintaining stability in the rest of the system,” Mr Zahawi, who is also apprenticeship adviser to Prime Minister David Cameron, said.

Sue Husband, the SFA’s director of apprenticeships and delivery service, then confirmed that “non-levy paying companies will still have access to government funding” once the levy has been launched.

This lack of detailed information from government about the reforms led a number of speakers to express their concern and frustration.

During a panel discussion at the end of the first day, Graham Taylor, principal of New College Swindon, called the new system “far too complex, unnecessary waste, increased bureaucracy”.

Stewart Segal, chief executive of the Association of Employment and Learning Providers, criticised the complexity of the system, adding that “the fact is that we’re here only a year way from a complete change and we’re low on details”. Iain Wright (pictured left), MP and chair of the BIS select committee, was strongest in his criticism. He hit out on Thursday morning, accusing the government of “making this up as they go along”.

“They have announced the policy and now are frantically thinking: ‘How on earth are we going to do this?’” he said.

His comments echoed those made by shadow skills minister Gordon Marsden earlier in the day.

“There’s absolutely no detail frighteningly so close to the implementation date,” he said.

In his keynote speech on the Friday morning, former business secretary Sir Vince Cable added to the criticism.

“What the government has done is to come up with a big idea hoping that the details will sort themselves out. I’m not sure that’s true!” he said.

Elsewhere, Sir Michael Wilshaw – whose speech on Thursday morning was perhaps one of the most hotly-anticipated of the event – was on fighting form as he defended his recent comments about the FE sector.

“It’s not a bias, it’s a criticism of what we see – and have seen for a number of years,” he said.

Alongside these arguments about the pace of reforms and standards, the conference also provided the opportunity to hear from the apprentices themselves. Shakira Martin (pictured right), vice president for further education at the National Union of Students, exhorted the government to include apprentices in its reforms, calling for the apprentice voice to be “integrated” into the new Institute for Apprenticeships.

This was followed by Laura-Jane Rawlings, founder and chief executive of Youth Employment UK, who gave a compelling reason for including the apprentice voice in reforms.

“How the hell can pale, male and stale know what it’s like to be 16?” she asked.