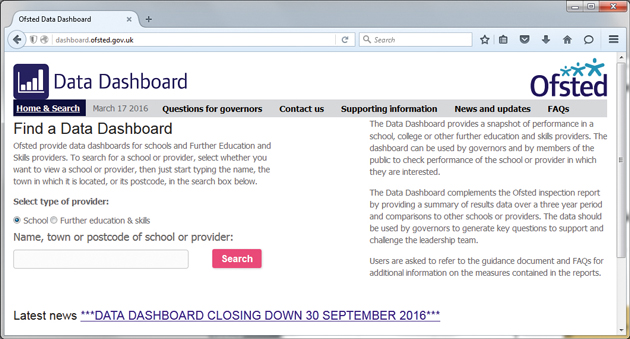 Ofsted’s FE and skills data dashboard is to close just two years after it was launched.

The announcement was made by the inspectorate on its website on March 15.

Yet the dashboard, which was designed to help governors and members of the public keep a check on the performance of providers, was only launched in May 2014.

An Ofsted spokesperson told FE Week that it “regularly reviews its outputs to ensure they are relevant, effective and good value for money”.

He added: “The FE and skills data dashboard was developed two years ago to help leaders and governors manage the performance of FE and skills providers.

“Since then, new products have been made available to the sector, both within and outside government. These provide similar information about FE and skills providers, so we have concluded that the data dashboard is no longer required.”

The Department for Education’s new school comparison tool was opened to the public as a beta service last week.

The spokesperson added: “It can be used to compare performance data across schools, and to check individual schools, using a similar graphical presentation to the data dashboard.”

The announcement on Ofsted’s website yesterday stated that the “data dashboards will not be updated with 2015 data”.

“However, the current dashboards will be available until September 30, 2016, after which the dashboard website will close down,” it added.

Ofsted also said: “Users of the FE and skills data dashboard will be able to save the webpages, taking care with the context tab, which contains a filter on the ‘Priorities for industry development’ table.

“The removal of the website will mean that we will no longer hold the dashboards and we will be unable to provide these to users.”

It comes after FE Week reported in May 2014 that governors would be given “greater access to performance information on their institutions through the launch of the dashboard”.