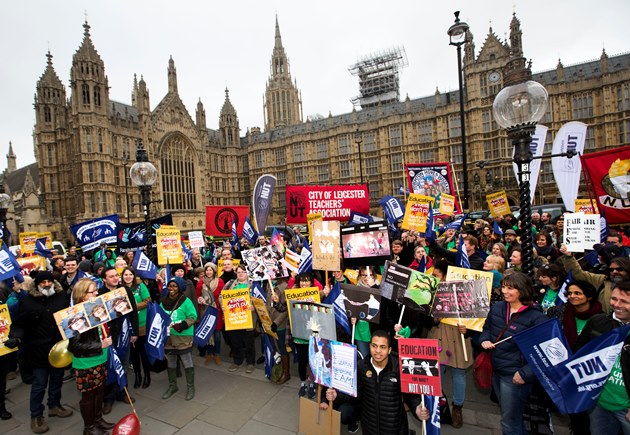 The National Union of Teachers (NUT) has led a one-day national strike for sixth-form college’s (SFCs) across the country, including a march on Parliament to protest against cuts to funding for the sector. The NUT held a rally at noon at the Camden Centre, where speeches were made by figures including Kevin Courtney, deputy general secretary of the NUT, and author and commentator Owen Jones (pictured left).

Protestors then travelled to Parliament on Routemaster buses (below right) branded with slogans including ‘save 16-19 education’, and chanted and waved banners outside the Department for Education (DfE).

A petition for education secretary Nicky Morgan was presented at the door.

Commenting on the strike, a spokesperson for the DfE said the department had spoken to 90 per cent of sixth form colleges yesterday (Monday 14), and knew of only two that were expecting to be closed due to the strike action.

The plan to strike had been temporarily threatened by court action, launched by the government in an attempt to prevent it taking place. However, London’s High Court yesterday (March 14) ruled against the challenge, enabling the strike to go ahead.

Commenting on the events, David Igoe, chief executive of the Sixth Form Colleges’ Association (SFCA), said: “As far as we know the strike is having little effect on the ground with no colleges reporting to us that they are closing.”

He added that the SFCA’s position on the strike action remained the same.

“We have no problem standing with the Union in pursuing a better funding deal for sixth form colleges, but believe this strike to be ill-judged and potentially damaging to young people’s education,” he said.

“This is a vital time in the run up to public examinations and a strike can damage the reputation of colleges with potential parents and students who are considering their next steps at 16.”

Mr Igoe added: “Our campaign of relentlessly presenting the evidence for the effectiveness and efficiency of SFCs led, we believe, to the helpful statement by the chancellor in the Autumn statement which both gave a funding guarantee for the sector and the opportunity to consider academy status and the VAT rebate.

“We will continue to press the government for recognition that the funding settlement for the 16-18 phase is inadequate and will prevent colleges and schools from delivering a worthwhile curriculum.

“Industrial action targeted just on the SFC sector is unlikely to make this case as effectively as our cross-party political campaigning and may, indeed, make things worse for our colleges.”

A DfE spokesman said in a statement on Monday (March 14): “The NUT is seeking to disrupt the education of thousands of students and damage the reputation of the profession. We are disappointed with the court’s decision and are considering our options.

“We recognise the importance of investing in education which is why, thanks to the difficult decisions we have taken elsewhere, we have been able to protect core 16 to 19 funding.

“At the same time we have ended the unfair difference between post-16 schools and colleges by funding them per student to ensure that all young people leave education with the skills they need to thrive in modern Britain.”

SFC members of the NUT voted for strike action on February 29, with 86 per cent in favour, from a 44 per cent turnout.

The question put to members was “In order to persuade the Secretary of State for Education [Nicky Morgan] to increase presently inadequate funding levels which cause detrimental changes to terms and conditions within the sixth form college sector are you prepared to take a day’s strike action?”