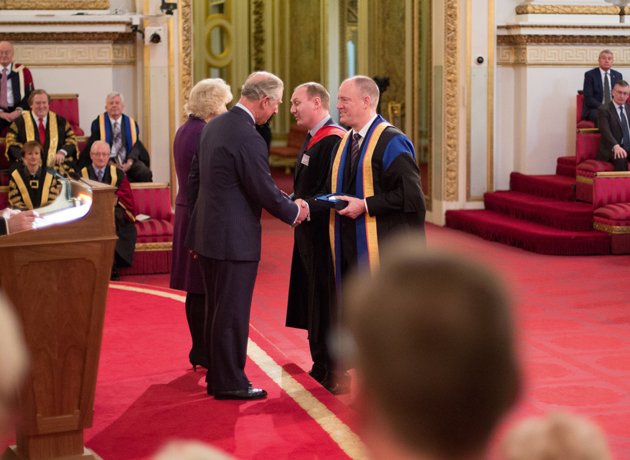 Bridgwater College representatives received the Royal treatment when they travelled to Buckingham Palace to collect their Queen’s Anniversary Prize for Higher and Further Education.

It was awarded to principal Mike Robbins and vice-principal Andy Berry by the Prince of Wales and Duchess of Cornwall with chair of governors Derek Randall and a number of staff and students also in attendance.

The prize, which forms part of the UK Honours system, is awarded every two years to colleges and universities whose achievements in terms of creativity, innovation and impact are considered to be exceptional.

Recognition for Bridgwater College came as a result of its pioneering” work with business, awarding bodies, universities and government at all levels to put in place high quality skills training.

Speaking after the ceremony, Mr Robbins said: “It is an absolute privilege to receive this highly prestigious award, which is testament to the commitment, dedication and passion of our students and our staff.”

Pic: Bridgwater College principal Mike Robbins (right) and vice-principal Andy Berry being presented with their Queen’s Anniversary Prize for Higher and Further Education by the Prince of Wales and Duchess of Cornwall