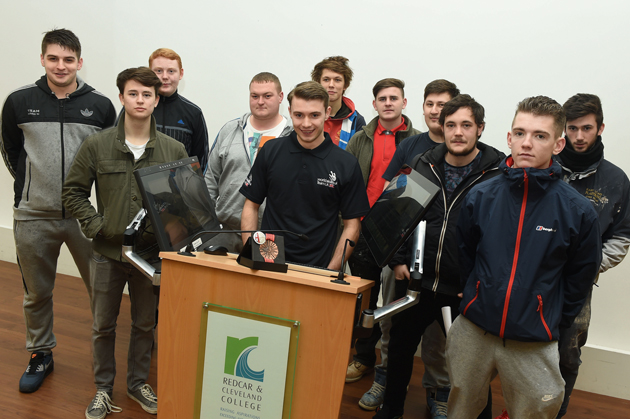 A former Redcar & Cleveland College plasterer, who scooped a Medallion of Excellence at the 2015 WorldSkills Championships, has returned to mentor the college’s current crop of students.

Rob Johnson completed his level three plastering diploma last year and visited the learners as part of the organisation’s College Champions initiative, a peer-to-peer mentoring scheme which sees high-achieving former students return to “unlock the skills of others” in their line of work.

The 22-year-old presented a video to level two plastering diploma students to share his experience of the WorldSkills Championships and offer an insight into the industry.

Rob, who works for his family’s North Ormesby-based plastering firm, Classic Plaster Moulds, said: “I’ve now reached the age limit to compete in such competitions [WorldSkills], but it has been fantastic to be able to pass on my knowledge to the students. Who knows, one day I might be judging them at the WorldSkills Championships.”

Rob is now studying for a teaching qualification at the college and, with the help of plastering lecturer Richard Cochrane, wants to become a tutor to help train the next generation of plastering talent.

Pic: Rob Johnson (middle) returns to Redcar & Cleveland College to help cement the futures of other plastering students hoping to follow in his footsteps