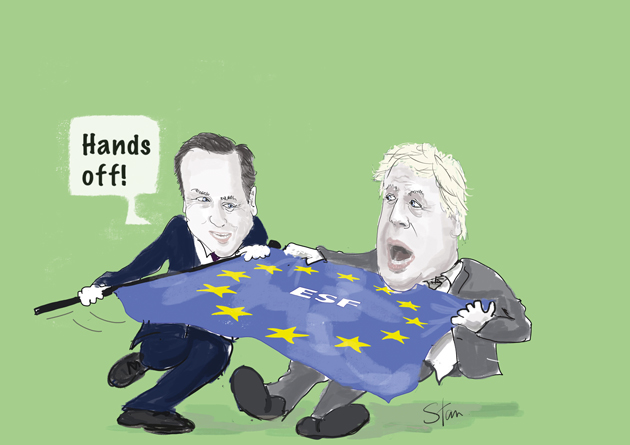 Questions remain over what the impact will be on cash from the European Social Fund (ESF) if the UK votes to leave the European Union (EU).

However the government has committed to providing more information before the country goes to the polls on June 23.

“As required by the EU Referendum Act 2015, the Government is committed to producing clear information, ahead of the referendum, on the outcome of renegotiation, the rights and obligations in EU law, an assessment of alternatives to membership and publishing the process for leaving,” a spokesperson for 10 Downing Street told FE Week.

The ESF is cash that the UK receives, as a member state of the EU, to increase job opportunities and help people to improve their skill levels, particularly those who find it difficult to get work. The current funding round, which runs from 2014 to 2020, is worth about €3bn (£2.3bn) across England.

It is administered through the Skills Funding Agency (SFA), Department for Work and Pensions (DWP), and the Big Lottery Fund, which act as co-financing organisations to provide match funding.

Projects delivered through the SFA focus on learning and skills, with a particular emphasis on young people who are not in education, employment or training (NEETs).

According to SFA allocations in 2014/15, 107 different providers, including colleges and independent training organisations, received a combined total of £305,267,633 in ESF cash.

The SFA’s current round of contracts, worth £650m, is being delivered with the involvement of local enterprise partnerships (Leps).

As revealed by FE Week in December, the funding agency is running a ‘sequence of procurement’ that must be finished by the end of September. All projects must be delivered by March 2018.

So far three rounds of invitations to tender have been announced, across 16 Leps.

No date has yet been set for when the UK would leave the EU in the event of a leave vote in June. According to a parliamentary research paper, published in 2013, there would be a two-year negotiating period after the UK notifies the EU of its intention to leave.

“The message re Brexit has been that the 2014 to 2020 programme will run in full at that value provided the UK makes the necessary match available,” said John Bell, senior partner at policy consultants Curved Thinking. Mr Bell is specialist adviser to the House of Lords European Union Committee and was policy editor of ESF-Works, which provided policy and practice lessons from ESF in England 2007 to 2013.

“The contracts DWP agrees with co-financers and providers are binding so far as we know, so it is likely that most would indeed run to term, but we cannot be sure,” he added.

David Cameron is leading the campaign to stay in the EU, while the London mayor and MP Boris Johnson — who will be leading the London area reviews of post-16 education and training — has come out in support of the leave camp.

A leave vote would lead to the UK no longer having access to ESF cash.

An expert in EU funding, who spoke on the condition of anonymity, told FE Week that “the people who would be losing out would be the people who need a lot of support, who have complex needs, who are battling all sorts of issues like homelessness, addiction, who are further away from the learning”.