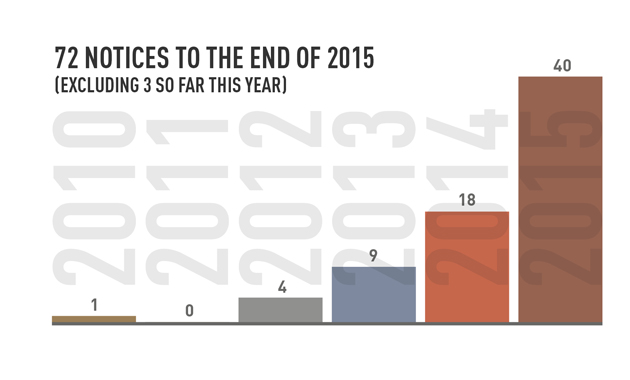 The number of notices of concern issued to FE providers by the Skills Funding Agency (SFA) has more than doubled in the last year, FE Week can reveal.

The notices set out the problems that providers must resolve, a timescale and the conditions under which the notice will be lifted.

Finances have been the main reason for the notices, with 55 per cent issued for concerns about financial health, according to data published for the first time by the SFA on 5 February. A further 8 per cent were delivered for a lack of financial control.

Ofsted inspection reports triggered 23 per cent of notices, while a failure to meet minimum standards prompted 15 per cent.

The majority of notices have also gone to FE colleges, which made up 47 of the 62 institutions to receive notices since 2010 — about 20 per cent of all colleges in England. Nine of the institutions receiving a notice were local authorities, and five were independent training providers. One notice went to special designated institution The Marine Society College of the Sea in Lambeth on 20 January 2015, for dropping from a ‘good’ to an ‘inadequate’ Ofsted rating in November 2014.

Commenting on the findings, a spokesperson for the Association of Colleges, said: “Some colleges are experiencing financial difficulties following significant funding reductions since 2010.

“The spending review will make it slightly easier for colleges to plan for the future, but there will only be a dramatic improvement in finances with longer-term funding agreements and higher rates.”

Malcolm Trobe, the interim general secretary of the Association of School and College Leaders, added: “Colleges don’t need these notices to point out the challenges they’ve got in delivering provision under these circumstances.”

Two providers, Focus Training and Development and Start Training, received a notice of serious breach according to the data. A step up from a notice of concern, this sets the conditions necessary to continue receiving public funds. Failure to meet its requirements can lead to contract termination.

Private training provider The Training Brokers took over Start Training in December 2015, a month after the notice was issued.

Esu Hill, the managing director, said: “We have since replaced the management team and will be addressing this area of the business as one of our primary concerns.

“Our chief aim is to turn Start Training in to a leading provider of apprenticeships in the north west. We have not been notified of a potential visit by the FE commissioner and have every confidence we will get through the re-audit in March.”

It comes after the AELP chief executive, Stewart Segal, said in a webinar on 26 January that “various reports suggest up to 90 colleges may fall into the [serious financial difficulties] category”.

He added that he hoped “we can save much of that £100m going into the sector to make sure it can continue” through the Government’s post-16 area reviews.

FE Week asked the SFA about the 90 colleges and £100m fund on the same day, but its response said that the figures were “out of date” and would be reassessed later in the year. The list of notices of concern and serious breach was published the following day (see illustration from edition 163).