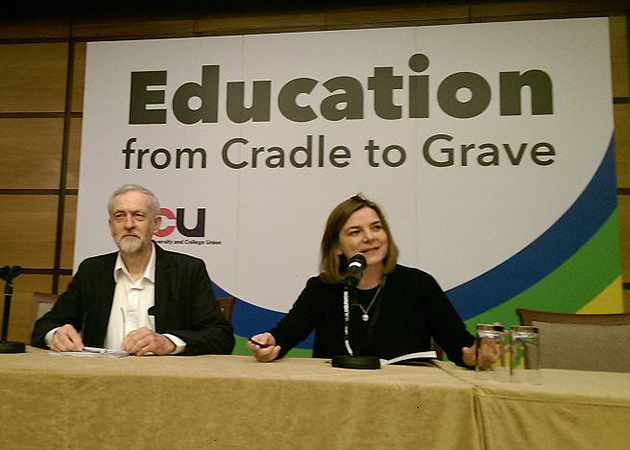 After giving a speech to a packed room at the University and College Union (UCU) conference ‘Education from Cradle to Grave’ (February 6), Labour party leader Jeremy Corbyn took time out of his busy schedule to tell FE Week his views on some of the sector’s most pressing issues. FE funding should not just be reliant on a hypothecated amount coming from an indeterminate amount of money from LIBOR [fines]. It should be a commitment from central government to properly fund it.

I’m generally speaking fairly sceptical about this process, because if you hypothecate a tax from one funding source or the other, you don’t know the extent of the funding that’s coming in, therefore you cannot be certain of what is going to go out.

I’d rather we said we’re going to guarantee that funding and obviously collect the LIBOR fines and pay them into the public purse where they should be paid. So Gordon Marsden will be chasing this up – he has indefatigable skills at following things through.

On the current state of the FE sector… I think the FE sector is going through a period of enormous change and turmoil. In Scotland there have been huge cuts in the number of colleges as a whole and a loss of a very large number of college places. The same process looks like it is happening in England, where there have been big mergers either planned, proposed or encouraged by government, and consequently a much more streamlined approach to courses – so the diversity of courses has narrowed.

Many are making very tough calculations about the numbers of students required to keep a course going, which loses out then on unusual skills areas. So you keep on hearing about small size but nevertheless important skills courses, high skill working courses, high skill electrician courses something, certainly things like jewellery making, all those courses that sometimes struggle to get large numbers but nevertheless are important for future economic benefit.

On the government’s target for 3m apprenticeships by 2020…

I am concerned about the quality of certain apprenticeships. On my travels around the country, and I spend three days a week campaigning and travelling around the place, and I look at the quality of them and they vary enormously.

I went to the Engineering Employers federation Centre in Perry Barr, absolutely superb, absolutely brilliant, top-notch stuff. I was in Middlesbrough STEM college, STEM centre of the college there – fantastic, the work that they’re doing. You look at the quality of apprenticeships of Jaguar LandRover, look at the quality of apprenticeships at Rolls Royce, Airbus, really good, really high quality stuff.

You look at others, where you think well, hang on, what is the training here? What is the qualification that comes out of this? I want every person who goes into an apprenticeship to be absolutely sure they’re going to come out of it with a qualification that is universally recognised and universally appreciated. and I think we’ve just got to make sure that happens. I also want the colleges who are doing apprenticeships to also deliver the wider education experience, so it’s not just totally vocationally skill-related. It should be related to a wider understanding of society. We want a better educated society where we value learning for learning’s sake.

University students by-and-large do get that wider experience, I don’t see why those that are doing vocational qualifications, who are going to be doing equally important jobs in the future, shouldn’t get that. An electrician is as valuable as anyone who has got a degree in anything else – they are all part of our society and we, too often in Britain, have not sufficiently valued vocational skills or science and engineering in our society. I come from a family of engineers, but I fell by the wayside and ended up with this job!

And finally, on the upcoming Institute for Apprenticeships… The idea behind it is good, being that there is some fundamental centre monitoring it, checking on the qualifications – that’s good. We need some details on it. We need to know who is going to be involved and we need it to be not just one section it needs to involve unions, employers, society as a whole – they’ve all got a contribution to make.

If you’re doing good quality apprenticeships and FE, then in any city you’d involve the employers in that area. I have had discussions with the CBI [Confederation of British Industry] about this on the apprenticeships levy and the amounts being charged, and I will be having further meetings with the CBI and the TUC [Trades Union Congress] on this.