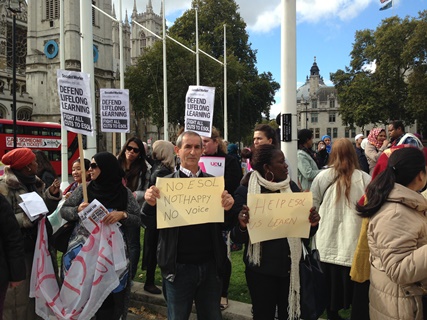 The London branch of the University and College Union (UCU) has called an emergency demonstration outside Downing Street in response to government policy on English for Speakers of Other Languages (Esol).

The demonstration, entitled Restore funding to Esol: don’t scapegoat migrants, is due to take place on Wednesday (January 27) at 6pm.

It has been arranged jointly with campaign group Stand Up to Racism, and is supported by Action for Esol and Lesbians and Gays support the Migrants.

A Facebook group promoting the demonstration says its aims are to “restore the funding for Esol”, obtain “free English classes for migrants and asylum seekers”, and “popularise the Action for Esol manifesto”.

On the Action for Esol website, the manifesto covers topics such as ‘the right to learn the common language of the UK’, ‘language, community and diversity’, and ‘professionalism’ and ‘pedagogy’ for Esol teaching.

The Facebook group confirms Shakira Martin, vice president for FE at the National Union of Students, and Daneille Tiplady, who has previously led a campaign for student nurse bursaries, as speakers at the event.

He said that the government needed to be “more clear about the expectations we place on those who come to live here” and the new fund would help Muslim women from areas with “segregation” issues to integrate more smoothly into British society.

A UCU spokesperson said: “The government has slashed funding for Esol, so for the prime minister to come out and start accusing people of refusing to learn English is quite incredible.  It is vital that people are given the opportunity to learn English and that requires sustained funding.

“People want to improve their English to give themselves a better chance of getting work and fully participating in British society, and we should be helping them do that, not threatening deportation.”

It comes after a protest was held outside the Houses of Parliament in October, with around 600 staff and students from across the FE sector gathering to protest against cuts to Esol provision.

The demonstration was focused on the government’s decision in July 2015 to cut funding for a £45m programme of English courses for foreign language speakers, run with Jobcentre Plus.