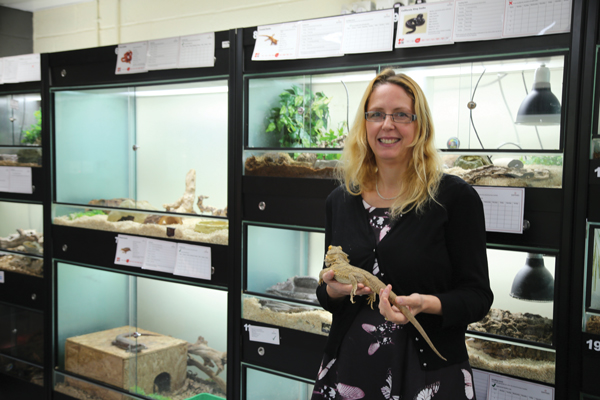 A Hartpury College lecturer’s ground-breaking study with NASA has caught the attention of the Discovery Channel and will feature in a series that aims to unravel baffling phenomena, writes Billy Camden.

Dr Rachel Grant will appear on the Discovery Channel as part of a ‘NASA Unexplained Files’ series.

The visiting associate principal lecturer at Hartpury College will appear for her research which looks into whether animal behaviour can alert us to natural disasters.

Dr Grant’s studies first started in 2009 near the city of L’Aquila, Italy, while a more recent study documents changes in animal activity before a large earthquake in Peru.

“I was working in Italy studying breeding behaviour of common toads when one day I went to conduct my research as usual and, to my surprise, there were no toads at all,” said Dr Grant.

“This continued for a few days and then five days after the disappearance of the toads, there was a magnitude 6.3 earthquake at L’Aquila, around 50 miles from the site of my research.”

After the earthquake, the toads returned to the area and Dr Grant decided to delve deeper what had happened. She published findings from Italy that looked for reasons for their disappearances, which resulted in Professor Friedemann Freund, a NASA scientist, contacting her about research he had been conducting on the behaviour of rocks under stress.

And Hartpury College learners have already been given a greater insight into the findings when Dr Grant presented her work this month.

“I think it is important for students to see real research that has been going on,” she said.

“Hearing about the process of how research happens, the pitfalls and the highlights, and some of the triumphs, I think it is nice for students to see the whole process rather than just hearing ‘so and so in 2010 said this’.

“I took them through how I started the research, what went wrong, what went right, what we found out and some of the press coverage on various papers that will give them an idea of real research.”

The learners heard how, before an earthquake, stressed rock releases charged particles which are involved in chemical reactions at the ground surface, forming substances likely to irritate animals.

He felt that changes to the natural environment occurring before earthquakes could cause changes in animal behaviours. Dr Grant then used motion triggered wildlife cameras in a national park in Peru to demonstrate that the disappearance of toads was because of earthquake activity.

After publishing her findings, Dr Grant appeared on various TV and radio shows all over the world including BBC News. The episode of Nasa Unexplained Files will be broadcast in the UK next summer.

Dr Grant said: “I’ve done quite a lot of filming in the past so it has become a bit routine but it will be very exciting when I see the research come out in the summer.”

Second to this discovery, Dr Grant notes her PhD research, which looked at amphibians’ reaction to the lunar cycle and found that several species mate around the time of a full moon, as her next biggest research finding.