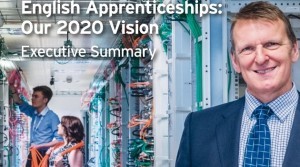 The government has laid out its timeline for implementing apprenticeship reforms over the next five years as it chases its target of 3m starts.

The 24-page English Apprenticeships: Our 2020 vision document, previewed by FE Week yesterday, was published this morning with key milestones for employers, providers and the government itself.

The document says a “consultation on public sector duty” due to be launched this month, and potentially in place from Autumn 2017, on forcing the employment of apprentices and public reporting of progress against apprenticeship targets.

Outcome-based success measures will also come into play from 2016/17, and from January 2018 performance tables will feature 16 to 18 apprenticeship results.

It also outlines how the new Digital Apprenticeship Service online portal will be rolled out from October, allowing employers to “select the most appropriate apprenticeships, choose a training provider and pay for apprenticeship training and assessment”.

An “integrated apprenticeships communication campaign” is expected from next month, while from next spring there will be a host of changes including, among others, protection for apprenticeship term from providers whose programmes do not meet statutory definition and the government will “set out plans for reform of technical and professional education”.

It further outlines the apprenticeship grant for employers as being extended to the end of 2016/17 and how expressions of interest, apprenticeships standards and assessment plans will be submitted to the new Institute of Apprenticeships body from April 2017.

And the end of National Insurance contributions for apprentices aged under 25 from April is listed, along with the publication of “top 100 apprenticeship employer lists” from next summer.

Meanwhile, updated guidance on the post-16 education area reviews is expected from February.