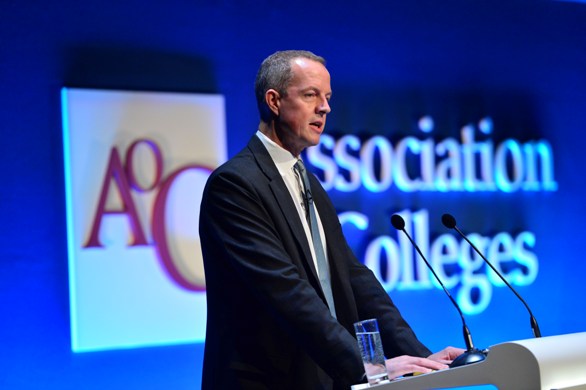 Good morning ladies and gentlemen. We meet in a sombre context.

After this morning’s session I’ll be returning to London and I hope you will agree on your behalf we will be travelling to the French Embassy to the sign the book of condolence after the terrible attacks on Friday night.

And I am sure it will have struck you as it has stuck me looking at those images in our newspapers that the victims were overwhelmingly young.

Not very different from the young men and women to who you and your colleagues dedicate your lives. And I want to thank you in the FE college system for your positive embrace in at the prevent duty which came into force on the 18 of September.

But larger than that we need to reflect on today on our commodity, moral and professional to do all we can to give those young lives and young hearts who might otherwise fall prey to extremist ideology a sense of hope, a sense of possibility and a sense of belonging and hope that this country can offer them a secure prosperous and happy future.

Possibilities that they can forge a career which fulfils them, rewards them and enables them to support their families and maybe above all a sense that they belong in this society that they, whatever their faith, whatever their race, that they are our brothers, our sisters, our cousins our neighbours and we value them and we respect them equally.

Now terrorism and extremism are not the only difficult challenges that we face. It is seven years since the start of the last recession and unlike others we will never claim that we have abolished the …. And in some day in the future, and none of us can know when, there will be difficult economic times again.

So we wanted to make an argument to the British people in the run up to the general election which was a simple one which said that their security, their economic security, their personal security and our national security depended on us taking some difficult but essential steps to restore the country’s economic strength.

And we won with the argument about the deficit. We secured, according to opinion polls, the support of even of those many who did not vote Conservative so that opposition of the deficit had to be brought down so that the economy was to remain strong.

And we won a clear mandate for further spending cuts to bring the budget into surplus by 2019. Now we do not relish making cuts.

There is absolutely no pleasure in the process of cutting budgets that go to FE colleges or any other part of public service. It would be easier not to do it but we made an argument, we won an argument. We made promises and the British people now expect us to deliver on those promises. Now I can’t give you any advanced insight into what is going to happen in the spending review.

We do not have long to wait and we can talk about it further after the chancellor has announced it. But you know and I know that those of us and those of you that are engaged in FE will not be insulated from further spending cuts.

So while we wait to discover how much those cuts are going to be and in what budgets, it seems to me that the best use of our time and energy is to ask this simple question, ‘what can you do and what can we in the government help you do to get ready for the years to come?’.

And the first thing you can do is to help you become stronger as institutions, more sustainable, more able to manage the impact of those budgets that shrink and capitalise on the potential of those that are going to increase.

And the first thing you can do is to help you become stronger as institutions. More sustainable, more able to manage the impact of those budgets that shrink and capitalise on the potential of those that are going to increase.
That is why we have launched this process of area reviews.

You are independent institutions and ultimately it is on you that both the responsibility and initiative falls for deciding how best to face the future. But I believe that you are better off, stronger together, rather than fragmented and vulnerable.

I believe that the first area review which took place in Norfolk and Suffolk has given us a very good model of how the process should work.

It began sensibly enough with an analysis of that area’s needs — talking to the local economic partnership, to local employers and other groups.

They then drew up different structural options involving sharing the costs, specialisation and curriculum reform.

They have now decided that Great Yarmouth College, Lowestoft College and Lowestoft Sixth Form College will merge to form one group and two other sixth form colleges are currently considering a range of possible thoughts of collaboration.

Now I did not dictate that outcome. I did not say ‘here is the solution that central government wants’ and it would not have been proper for me to do so because colleges are independent.

But equally we were very, very clear in underlining that there is a limit to the ability of government to go on helping out colleges with long-running deficits.

If I’m to persuade the Chancellor to give us some money to support college through difficult years, I need to be able to show him that colleges are taking the initiative, taking some difficult decisions, reorganising themselves to be stronger for the future.

Area reviews are a necessary condition of a strong and resilient FE sector, but by themselves they will not be sufficient.

We also need to help you take advantage of those funding streams that are growing. Advanced learner loans where progress to date for reasons we all understand have been limited and most of all apprenticeships.

With that 3m target and just briefly, though I adore Alison Wolf, I do not agree that that target is a distraction. Even if we hit that target, we will still have fewer apprentices per 1,000 of population than almost any of our European competitors and if it works for them and makes them productive I do not think we should shrink from the same level of ambition.

So that target is going to provide further investment and the new apprenticeship levy that the Chancellor will be announcing the level for in the spending review will provide substantial additional resources to support training in the nation’s apprenticeships.

So while I cannot tell you how much, I can promise you we will be spending a great deal more of taxpayers’ money on apprenticeship training in 2019/20 than the £1.5bn that we are spending in 2015/16.

But the truth is that the FE sector only secures about £500m of that— 37 per cent of all funding for apprenticeship training will go to FE colleges in 2015/16, but 60 per cent goes to private training providers.

Now I’m a Conservative. I believe in private enterprise and competition and I salute the work of some of the outstanding private training providers who have raised standards and enabled companies of all shapes and sizes to take advantage of apprenticeships.

But as your friend I have to ask you this ‘why on earth are you letting these guys nick your lunch?’.

Now today I want to ask you to raise your sights and sign up to a shared ambition that by 2020 FE colleges will be responsible for two thirds not one third of all apprenticeship training and will receive two thirds of what will be a much larger pot of funding.

I’m not going to intervene to somehow stop private training providers from winning that business but I want to help you give them a very good run for their money.

I’m absolutely confident that you can do it. At the moment, apprenticeship contracts are awarded by the Skills Funding Agency and the Education Funding Agency, but by 2020 there is going to be a complete shift in the way this market operates. Nobody will be receiving an SFA or EFA contract for apprenticeship training by 2020.

Employers will receive vouchers that they’ve either paid for through the levy or some other means and they will take the decision about what training they want to buy and where do they want to buy it from.

This is your opportunity. You have the profile in your communities, you have relationships with local employers through chambers of commerce and local economic partnerships, you have the facilities and qualified teaching staff.

But you do need, most of you, to change your approach. You need to be more flexible and entrepreneurial and quicker off the mark.

You will need to ask employers what they want and work out how you can provide it, not just offer them what is convenient for you to deliver. I want to help you learn from those colleges that have been remarkably successful in their apprenticeship performance. If they can do it, I absolutely know that you can do it too.

I want to work with Martin and the AoC to ensure that you have all of the tools, all the advice, all the benchmarks, all the leadership to help you make it happen.

I understand that there is much more to the life of a great FE college than apprenticeships and there always will be, but the best way to secure the future of the broader provision that you are responsible for in your communities, the best way to secure the opportunities for the vulnerable people, older people who have been failed, people with special needs and disabilities, in tough times is to ensure that you are really good at apprenticeships, because if you can secure two thirds of the funding that will be available for apprenticeships by 2019/20 you will prosper as institutions and be able to support the broad range of provision that you all believe.

Apprenticeships are the future and I want the FE sector to lead the way, thank you very much.”