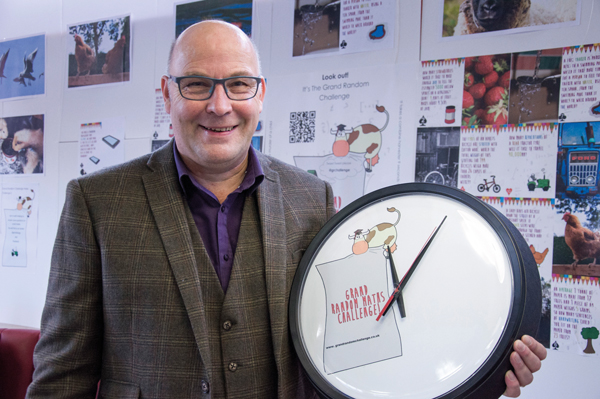 A City College Norwich lecturer is aiming to take the fear out of maths with a series of random challenges he has created over a 30-year teaching career, writes Billy Camden.

From pogoing hamsters to tomato ketchup-filled canals, Phil Gulliver (pictured) is hoping to take the fear out of maths for students with a set of Grand Random Challenges he has noted down over the last 30 years.

After gaining funding from the Ernest Cook Trust and the London Mathematical Society, the maths teacher at City College Norwich developed the range of weird and wonderful puzzles to target vocational-style learners.

He is currently training staff in schools and training centres to use his unique approach and his current further maths learners are also using the techniques.

The questions focus on the process of solving maths problems, while deliberately allowing for there to be no “right answer” to the problem itself. Mr Gulliver said: “The problem with maths is that if you give somebody a page of sums, and say ‘there you are Fred, do that’, they will know that there is one right answer. And if they think they are not very good at maths they will be intimated by that and they will say ‘I can’t do it’.

They took on puzzlers including, “a hamster jumps on a suitably sized pogo stick and bounces continuously for 99 years. Would the total distance travelled be greater than 99 trips up the Eiffel Tower?”

And, “it takes 100 tomatoes to make five standard bottles of ketchup. How many tomatoes would you need to make sufficient ketchup to full the 127-mile long Leeds-Liverpool canal?”

The questions that feature in the Grand Random Challenges vary in their difficulty, so maths teachers can use differentiated learning within their classes.

Over the years Mr Gulliver has progressively been turning his challenges into attractive and engaging resources for students and teachers, including packs of cards, workbooks and short videos.

Students from City College Norwich, including photographers, graphic designers and media students, have helped in producing images, illustrations and animations for the questions. Performing arts level one learner Rutendo Mukuya, aged 17, uses the method during her GCSE maths lessons, which she takes alongside her vocational course.

She said: “I think the fact that he [Mr Gulliver] takes weird situations and puts them in questions makes it much more fun, even though I don’t actually enjoy maths that much. The challenge made it much easier with those questions because it’s weird and you really want to know what the answer is.”

Mr Gulliver said: “I am hoping staff will appreciate that the process skills involved in answering these bizarre questions are really, really valuable and will help in the more traditional mainstream mathematics.”