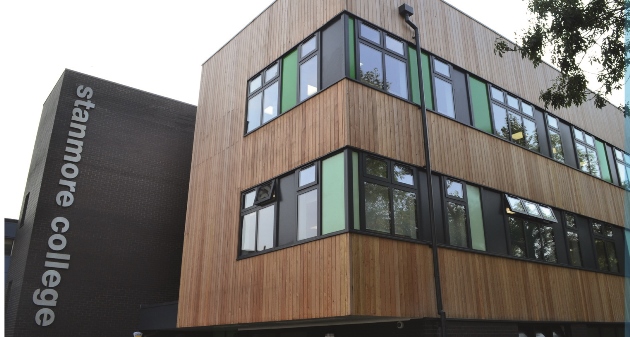 London’s Stanmore College has been handed the ignominious honour of being the first general FE college to be branded inadequate under Ofsted’s new common inspection framework (Cif).

It slumped from requiring improvement in its previous inspection report in May last year, to the grade four result with principal Jacqui Mace (pictured below right) and her governors coming in for criticism.

Inspectors said they had not taken “swift and decisive action following the previous inspection and consequently the quality of provision declined further”.

She told FE Week that she would not be stepping down, and claimed the result would have been better under the old Cif, which was replaced in September. However, Ms Mace said the 3,500-learner college, which has a current Skills Funding Agency (SFA) allocation of £2.1m, accepted the Ofsted grading.

“I think we would have got a better grade under the old Cif as we had self-assessed ourselves as requiring improvement — we think that we still require improvement,” said Ms Mace.

She added: “I’m here to provide some continuity for the Ofsted monitoring visits we’ll now get and the FE Commissioner inspection and then we’ll see what the best way forward is.”

The blow comes with college leaders having agreed to “explore closer collaboration” with grade two-rated Harrow College, which has an SFA allocation of £6.6m and is less than four miles away. It also comes with London’s post-16 education area review, in which the capital’s mayor Boris Johnson is expected to play a leading role, set to launch soon.

The deal, signed by Ms Mace and Harrow principal Pat Carvalho on October 22, states: “We believe that such collaboration could potentially provide a broad and inclusive offer, building on each college’s strengths while seeking to enhance education and training opportunities for students and employers in West London.”

Stanmore’s report was made up of six inadequate and one ‘requires improvement’ headline field ratings.

Among Ofsted’s criticisms were that managers “do not use data and information well enough to identify weaknesses and to intervene to bring about rapid improvement” and they “have an unrealistic view of the quality of teaching, learning and assessment because their evaluation of teaching focuses on what teachers do in lessons rather than on the progress that learners make”.

“Leaders have not yet implemented fully the principles of study programmes for learners aged 16 to 19,” inspectors added.

Just one strength was listed for the college, with learners benefiting from “very good welfare support that helps them to overcome the personal difficulties that they face in their everyday lives”.

Ms Mace said: “We’ve taken on board what Ofsted said and we’ve got w very rigorous action plan in place which we are following. We already feel that it’s making an impact.

“But we don’t necessarily agree with all the findings of Ofsted. We did feel that the whole process, the inspection process, in its new framework was extremely different from previous years and one of the things that we noticed very much was that they hardly carried out any lesson observations.

“I think only about three lesson observations, everything else all the teaching and learning was assessed through learning walks and they didn’t necessarily see a broad range of lessons — they kept going back to the same ones that they’d already seen.”

Ms Mace, who said she planned to retire this year, also described the nine-page Ofsted report as “very short”. The previous inspection report ran to 16 pages.

“It doesn’t really give Ofsted enough space to talk about the good things,” said Ms Mace.

Ofsted said it did not comment on individual inspection results.