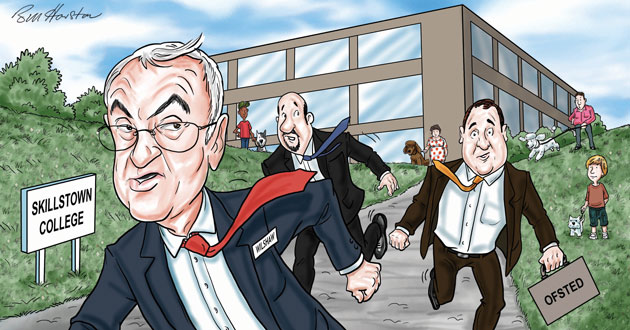 A Midland college has incurred the wrath of local dog walkers with its response to Ofsted safeguarding advice to improve grounds security.

Warwickshire College Group (WCG) group was rated as good by Ofsted in April — but inspectors said “access to their sites needs to be more secure”.

They also said managers at the 14,500-learner college group had drawn up “substantive plans” to address the issue.

But those plans, to block access through most of the 750-acre grounds of its Moreton Morrell campus, provoked outrage from locals who walked their dogs through the site.

Nearly 200 residents protested by walking their favourite route through the grounds on November 1 — two days before the college’s new restrictions came into force.

One of the protestors, Lesley Maynard, aged 57, said walking around the grounds of the Moreton Morrell campus, where around 1,500 learners are taught, had been “a pleasure for local residents for many years”.

“I have two children and when they were young, we would walk, with other village families, through the college grounds, watching the lambs and wildlife,” she added.

Ms Maynard said walkers had caused the college “no problems” over the years — but “the small pleasure is now being taken away from the village”.

“As a small rural community we have to put up with quite a lot from the college — traffic being an issue which will increase when the Henley-in-Arden campus closes next year and the students are bussed to Moreton Morrell,” she added.

“We don’t make a fuss. A little give and take is all we ask.”

A WCG spokesperson told FE Week: “For many years now, village residents have used our grounds for walking and it is with regret that given our increased responsibilities under our Prevent Duty and safeguarding we have had to take this difficult decision.”

She added that the Ofsted comments had provided “further reinforcement of our decision”, but had not been “the only driver”.

She said the campus, which specialises in land-based subjects including agriculture, equine studies, and animal welfare, had “large and growing numbers of under 18s on site, including students in our on-site residential accommodation, and with this the need to conduct more comprehensive risk assessments”.

“We are of course sorry that the villagers are unhappy with this decision and in
order to provide an alternative facility, we have introduced a new permitted walk around a parcel of our farmland in agreement with the Parish Council,” she added.

An Ofsted spokesperson said: “It is important that colleges provide a safe environment in which learners can develop their skills.

“The steps taken to ensure this safety are the college’s own responsibility.”

All FE institutions have been subject since September 21 to the Prevent Duty, as reported in FE Week, which requires them to put policies in place to prevent potential radicalisation of learners and exposure to extremism.

The Department for Business, Innovation and Skills and the Home Office, which oversees the Prevent Duty, declined to comment.