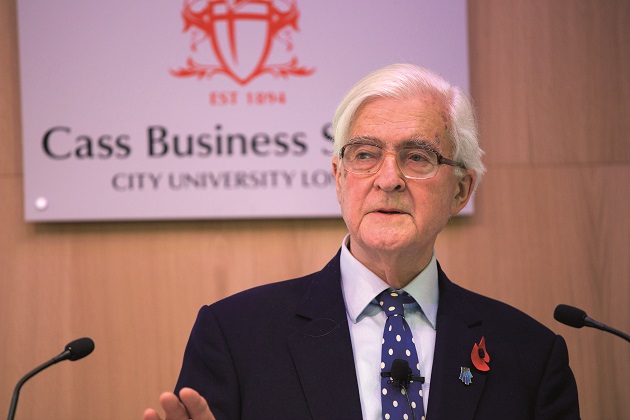 Former Education Secretary Ken Baker (pictured above) has hit back at criticism that his university technical college (UTC) project had been given a “get out of jail clause” in government plans for the English Baccalaureate (EBacc) performance measure.

Lord Baker, co-founder of Baker Dearing Educational Trust (BDT), which has been working to develop UTCs, also defended the institutions over claims they simply replicated the work of general FE colleges.

The Conservative peer used his speech and appearance at the ninth annual Sir John Cass’s Foundation Lecture to defend UTCs, which offer 14-19 vocational training in science, technology, engineering and maths-based (STEM) subjects, alongside the teaching of core academic subjects.

He said he was “not in favour personally” of the 14-16 Ebacc, for which a government consultation launched this week with UTCs, studio schools and FE colleges potentially exempt from the measure while officials were “consulting on how the policy should apply”.

The exemption from the Ebacc measure — which shows the proportion of pupils in a school entering and achieving a good GCSE in English, maths, science, a foreign language and history or geography —drew criticism on Twitter from the likes of @SchoolDuggery, who described it as a “get out of jail clause for UTCs”.

The government is consulting on making 90 per cent of pupils do Ebaccs from autumn 2017, but Lord Baker called for more “technical, practical, vocational, hands-on training and learning”.

“Ebacc was the exam I took in 1951, called the school certificate. Item for item, it was the same thing,” said Lord Baker. “And it was abolished in 1951 because it was too narrow.”

The government consultation, which closes on January 29, says that “like pupils attending UTCs and studio schools, [14 to 16] pupils [at FE colleges] have chosen to specialise in a technical or professional area from key stage four”, which would be likely to make them study “a smaller academic curriculum” unsuitable for EBacc.

Charles Parker, chief executive of the Baker Dearing Education Trust said: “It seems to us that the compulsory EBacc is not compatible with the UTC program. We are glad to see that the consultation recognises this.”

Catherine Sezen, 14-19 and curriculum policy manager at the Association of Colleges, said the consultation meant FE colleges with learners aged 14 and over would have “a chance to respond to the government’s proposals”.

Nevertheless, in his speech, entitled The Intelligent Hand — how we can solve the problem of people without jobs and jobs without people, Lord Baker went on to say: “The greatest problem facing our educational system is that it is not being geared up to providing what industry, business and commerce require”.

He laid part of the blame for this at the door of FE colleges, and said: “If FE colleges were as successful as people believed, we wouldn’t have a skills gap today.”

He also hit back at comments by Northampton College principal Pat Brennan-Barrett at a House of Lords Social Mobility Committee meeting where, as reported by FE Week, she said UTCs did “the sort of work that FE colleges have done for many years”.

Lord Baker, speaking at the November 4 event at the Cass Business School in London, said: “The trouble is that so many FE colleges have never related their output to what the needs of the economy are, and what the needs of industry are.”