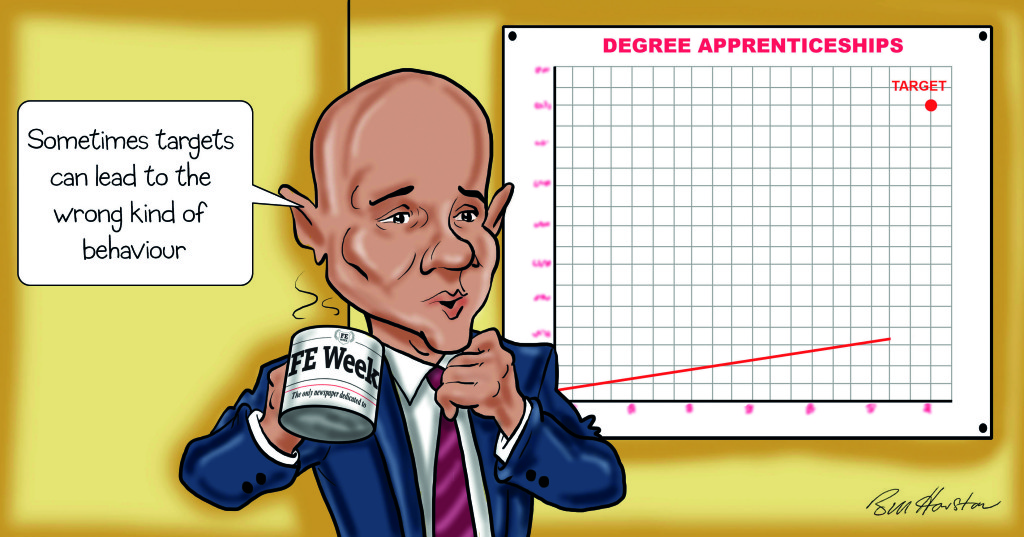 Business Secretary Sajid Javid has ruled out a degree apprenticeships target — warning it would be “too complex” and could “lead to the wrong kind of behaviour”.

The Bromsgrove MP was grilled by members of the House of Commons Business, Innovation and Skills Select Committee on Wednesday (October 14) in a one-off evidence session.

They questioned him about whether — in light of the 3m apprenticeships target for the period of this Parliament having been set — government should also be aiming for a set number of higher level apprenticeships.

“We have not set a target for higher level apprenticeships. Sometimes your targets, just generally, can lead to the wrong kind of behaviour and be too much of a blunt instrument,” said Mr Javid.

“So I didn’t want to have more targets within targets, and then more targets as it would make it more complex.

“We have rationale for it, and I have explained that, but we want to see an increase in quality.”

He added: “If your concern that it is just about quantity that the government is going to focus on then it couldn’t be further from the truth.”

It comes with the latest statistical first release showing that, provisionally, the number of higher apprenticeship starts last year came in at 19,300 — just under 4 per cent of the total number of apprenticeships (492,700).

And Mr Javid told members of the committee, which was looking into the work of the Department for Business, Innovation and Skills (BIS) and also heard from BIS permanent secretary Martin Donnelly, of the government’s “passion” for degree apprenticeships.

He told how he wanted to see the proposed levy help fund growth in the programme.

“We want to see a big growth in that and it costs a lot of money and I wanted to see if there was a sustainable way to fund that and that is why we came up with the levy.

“But there are different types of quality apprenticeships and within five years from now there might be a type of apprenticeship that we don’t have today, in terms of focus.

“But if employers demand a certain skill that they think can also be dealt with by an apprenticeship, if it is not just through a degree route for example, then we want to leave that flexibility.”

He added: “There will be a huge focus on both the quality of apprenticeships as well as the quantity.