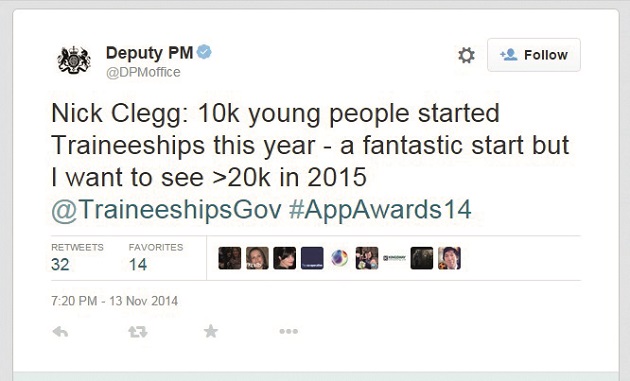 Better advice and guidance for young people is needed with figures suggesting 16 to 24-year-olds were making up a shrinking proportion of apprenticeship start numbers, it has been claimed.

The troubled, and ultimately scrapped, 24+ advanced learning loans for apprenticeships are widely acknowledged to have been responsible for the 2013/14 fall.

Teresa Frith, AoC senior skills policy manager, said: “It’s more difficult to recruit apprentices in the 16 to 18 or 19 to 24 age groups for a number of reasons.

“Better careers advice and guidance would make young people aware that an apprenticeship could be an option for them to get a foot on the career ladder.”

Stewart Segal, chief executive of the Association of Employment and Learning Providers, said: “The numbers for 25+ are still 20,000 lower than the pre-loan figure but the government nailed its commitment to all-age apprenticeships to the mast well before the general election and you are seeing employers and providers respond.

“Nevertheless, AELP wants to see starts for 16 to 24 increase every year and we strongly support initiatives such as better information and guidance to help make that happen.”

The government, in her view, was misleading people into “believing we’ve got all these young people into good training jobs which will not only provide them with good solid jobs when they’ve finished but also solve all our skills shortages”.

The reality, she said, was that “very few of them are for 16 to 18-year-olds, most go to those already employed in the firm.”

A BIS spokesperson said: “We are developing a comprehensive plan to grow the number of high quality apprenticeships. This will include working closely with large employers, more support for small businesses and a renewed emphasis on promoting the value of apprenticeships.”