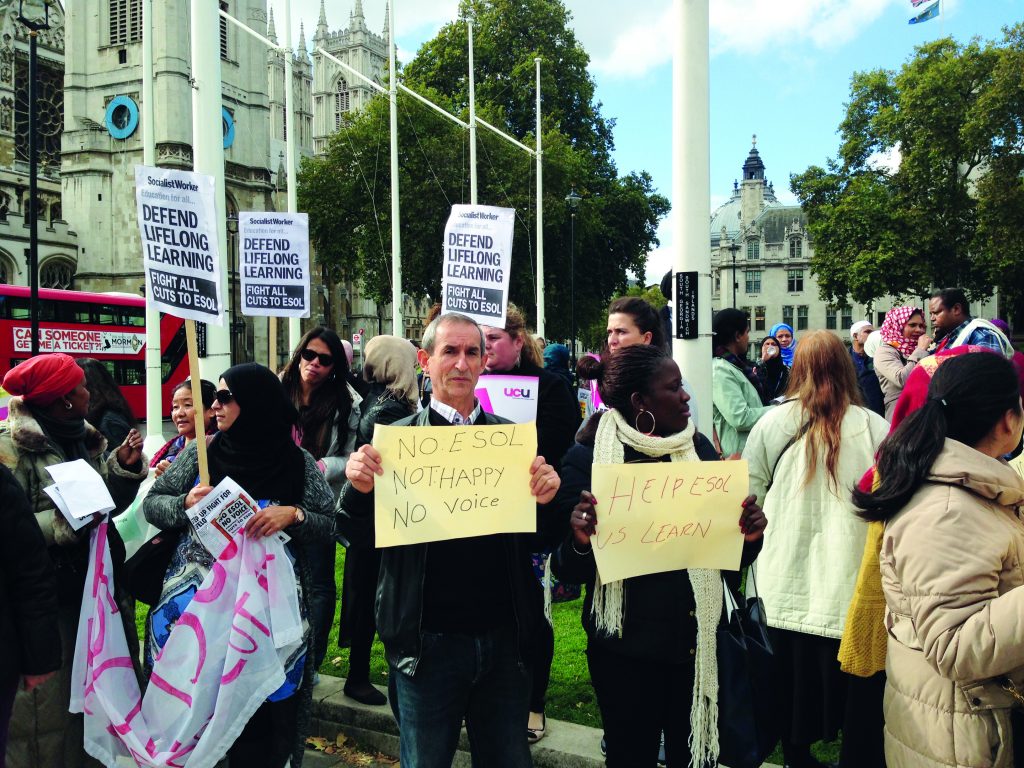 Government ministers were missing from a lobby on funding cuts to English for Speakers of Other Languages (Esol) — despite the event drawing hundreds of demonstrators from across the FE sector.

Around 600 staff and students from a range of colleges gathered at the Houses of Parliament on Wednesday (October 14) to protest against the cuts, but no members of government attended the event to respond.

Laila El-Metoui, an education officer for charity Schools Out UK, described the event as a “huge success with some great motivational speakers”, but added that she was frustrated by the absence of government representatives.

“Shame, shame, shame on BIS [the Department for Business, Innovation and Skills] and the SFA [Skills Funding Agency] for not turning up and not sending a representative, because they are the ones holding the strings to the purse and they didn’t even bother,” she said.

The rally, hosted by campaign group Action for Esol and the University and College Union (UCU) London branch, came in response to the government’s decision in July to cut funding for a £45m programme of English courses for foreign language speakers, run with Jobcentre Plus.

But Labour politicians Matthew Pennycook, Richard Burgon and Andy Slaughter were the only MPs to attend.

A BIS spokesperson declined to comment on why it had no representative had been present or whether the rally would influence Esol policy.

Instead, he said: “The government continues to cover the full cost of Esol for those who have been in the UK for at least three years, are in receipt of JSA [Job Seekers Allowance] and who need to improve their English in order to find work. This will continue to be funded through the Adult Skills Budget.

Rebecca Durand is an Esol teacher from Tower Hamlets College. She brought her students to the rally and said her college had long waiting lists, with applications for Esol building up as classes are cut back.

“It’s getting harder and harder for students to get into the classes. There are so many restrictions … we’re being treated like we’re part of the immigration services and part of the welfare system. We just want to teach English,” she said.

A number of Tower Hamlets College students attended the demonstration, including Aziza Rahima, 46, who came to the UK from Bangladesh eight years ago with her husband and two sons, aged 19 and 11. She said she enjoys studying at Tower Hamlets and has found it very helpful, but added that she is worried about the cuts.

“Our Esol class funding has been cut. We are not speaking English properly. It’s all cut so we have a real problem,” she said.

Students not only joined the rally but some also chose to make speeches themselves, facing a large audience to express what language learning has meant to them.

Michela Ravano, an Esol teacher from Morley College, said she was “extremely proud” of her students for speaking out at the event.

“They could hardly speak English and they went up there and said their thoughts, it was very moving.

“It is very difficult to stand up and speak in other country and express your rights,” she said.