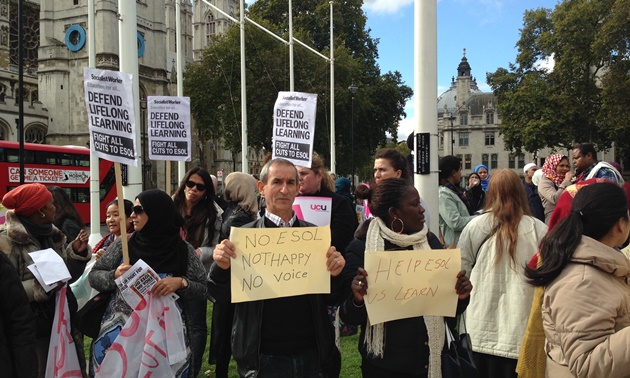 Staff and students from across the FE sector gathered outside the Houses of Parliament in their hundreds today to protest against cuts to the provision of English for Speakers of Other Languages (Esol).

Demonstrators, said to number around 600 in total, joined the rally to protest against the government’s decision in July to cut funding for a £45m programme of English courses for foreign language speakers, run with Jobcentre Plus.

The crowds were brought together by campaign group Action for Esol and the University and College Union (UCU) London branch, which organized the event. As well as protesting with banners and chants outside Parliament, students and staff from a range of colleges attended talks and debated inside Westminster.

A handful of brave Esol students also faced the audience themselves to express what the language learning had meant to them, but no government representatives were present to respond to the concerns.

According to reports from the UCU, Bradford College has already announced it will cut one-third of its Esol classes with the loss of nine jobs, while Brent Adult and Community Education Service is to get rid of two-fifths of its Esol courses, leading to the loss of five jobs.

Two thirds of courses will go at Ealing, Hammersmith and West London College, where 25 jobs will be lost, and Hackney Community and Tower Hamlets colleges have said their Esol courses are not guaranteed to run after Christmas.