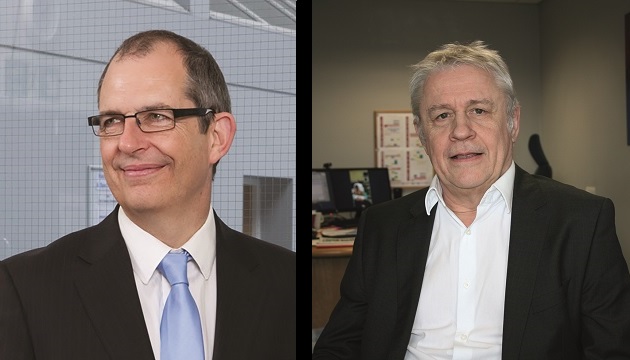 Barnfield, in Luton, received a letter last month from Skills Minister Nick Boles confirming Dr Collins’ role at the college was over.

It followed a visit in July from his adviser that concluded the college had addressed all of Dr Collins’ recommendations.

The adviser’s report, seen by FE Week, praises the college for progress in “reviewing staff and removing those who are not willing to change the way they work” and notes that a new leadership team is in place “with a clear vision of where they want the outcomes to be”.

Tim Eyton-Jones (above left), principal of Barnfield, said: “This is a major milestone in the college’s recent history and marks a positive transformation and direction we will be continuing.”

Dr Collins’ recommendations to Barnfield, which has more than 7,250 learners, were intended to address areas of concern identified during his two visits to the college, in January and the same time last year.

He saw weaknesses in governance and management, financial regulation and quality improvement measures.

His recommendations included a management structure review, cutting staff costs, and ensuring the governing body had greater scrutiny of curriculum, standards and finance.

Dr Collins’ first visit to Barnfield College was triggered by the college being assessed as inadequate for financial control by the Skills Funding Agency (SFA).

The second followed an Ofsted inspection in November, which rated the college as inadequate in all areas with no key strengths.

The letter to the college from Mr Boles states that: “While the college remains inadequate for Ofsted inspection and in formal intervention until it has fully complied with conditions in the Financial Health Notice of Concern, the FE Commissioner is satisfied that his engagement in the current process is complete and intervention monitoring will pass to the SFA.”

Meanwhile, a spokesperson for the Department for Business, Skills and Innovation (BIS) confirmed the FE Commissioner-led Structure and Prospects Appraisal (SPA) at Weymouth was concluding after it met financial and enrolment targets set by the SPA.

Weymouth, which has almost 4,000 learners, was told by an FE Commissioner adviser this month that Dr Collins was “ready to take a step back from his oversight role” following indication that its break-even budget plan for 2015/16 was on track, according to a college spokesperson.

Nigel Evans (above right), interim principal at Weymouth, said: “The FE Commissioner and his team helped us identify and implement a sound financial plan, which should allow us to continue to serve the needs of students, parents, employers and the wider community right across Dorset.”

Dr Collins started the SPA at Weymouth following his visit in March last year, after the college had been assessed as inadequate for financial control by the SFA.

In his report, Dr Collins said: “The college’s financial difficulties arise partly from ambitious plans to grow its 16-18 provision after several years of decline in learner numbers.

“Unfortunately, the college did not ensure it had the necessary finances to fund all developments in advance.”

An Ofsted inspection in January resulted in an inadequate overall rating, despite good ratings for learner outcomes and teaching, learning and assessment, due to principal Liz Myles’ handling of college finances. She resigned in February having been suspended late last year.

A monitoring visit by Ofsted in July found “significant” and also “reasonable” improvement” in all areas it looked at again.