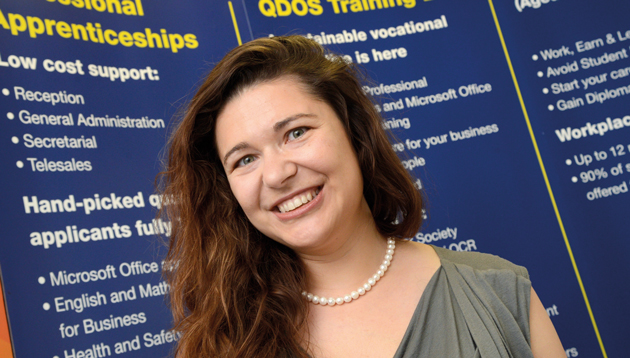 An independent learning provider that faced losing its Skills Funding Agency (SFA) contract after an Ofsted inadequate rating over safeguarding fears four months ago has managed to hold onto its public funding deal following a good Ofsted judgment.

Leicester-based firm Qdos was given three months’ notice that its SFA contract would be torn up after inspectors reported in April how two staff members had regular and unsupervised access to learners under 18 without relevant criminal checks.

However, company boss Elena Ryabusha (pictured) said the concerns related to two unrelated incidents which were a result of oversight, rather than systematic failures.

A positive monitoring inspection in May found Qdos was making progress to address issues — leading to the SFA granting the firm a three-month stay of execution.

Qdos was then re-inspected on July 28 and rated as good, with inspectors praising the firm’s significant improvements.

The SFA has now confirmed it has withdrawn the termination notice.

Ms Ryabusha told FE Week: “My staff have been through a tough and emotional journey to make this happen and I am very grateful to work with such resilient, tough and hardworking people.

“Many times each one of us felt we are buckling under pressure but we kept going. We had a threat of losing our company and our livelihoods and we fought for it.

“This was not a journey for faint-hearted and we have endured it together and have come out on the other side victorious.”

She praised the SFA for its support following the inadequate grading when, as FE Week previously reported, talks took place to secure a delay to the contract termination pending full reinspection.

The SFA did not respond specifically when asked if other ILPs newly-rated as inadequate would also have a chance to retain their public funding contracts.

But a spokesperson said: “Following two subsequent Ofsted visits, reasonable improvements were noted and as a result Qdos had been given a ‘good’ rating by Ofsted for its overall effectiveness.

“In response, on July 31, we notified Qdos Training Limited that we would lift the notice of termination due to take effect in September and its contract would continue.”

Ofsted is required to re-inspect an inadequate provider within 15 months of the last inspection.

A spokesperson for the education watchdog said: “Inspectors found the provider was taking effective actions during the monitoring visit. Therefore, a decision was made to re-inspect it soon after its last inspection in order to see the full impact of the changes made.”

The inadequate report, which came after a good result in 2011, called for disclosure checks on all staff working unsupervised with young learners “as a matter of highest priority”.

It also said Qdos should “systematically train staff” to understand safeguarding and led to the SFA giving the provider a three-month notice to terminate its contract.

Qdos, which had an SFA allocation of £763k last academic year and has around 80 learners, offers apprenticeships and classroom-based programmes in customer service, ICT and administration.

Upon re-inspection the firm was praised for its rapid improvements. It received a ‘good’ grade across the outcomes for learners, quality of teaching, learning and assessment and effectiveness of leadership and management categories.

Ms Ryabusha said improvements were driven by providing training programmes for all staff in safeguarding, health and safety and equality.

The online programmes were also followed up by external and internal workshops.

Ms Ryabusha added: “All we talked about was impact on learners. Our every minute of every day was devoted to improving quality of our provision.”