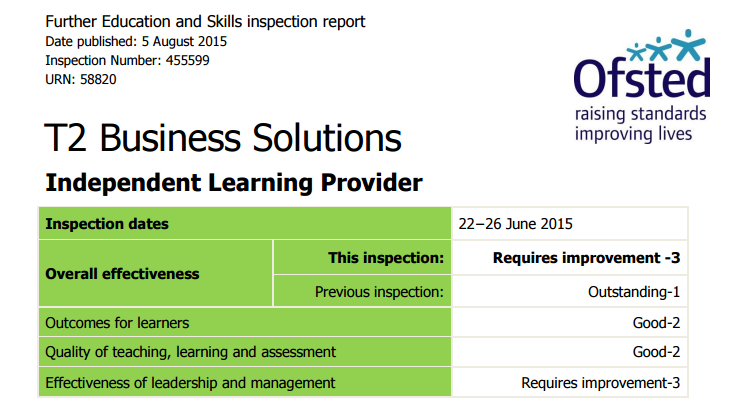 Independent learning provider t2 Business Solutions has been hit with a grade three Ofsted rating after concern was raised about failures to safeguard learners and vulnerable adults.

The report published today on the Cardiff-based provider rated its health and social care apprenticeships provision as ‘good’, and employability training including traineeships as ‘outstanding’.

But t2, which was previously rated ‘outstanding’ by Ofsted in May 2012, has now slumped to a grade three-overall rating, with the report warning that leadership and management ‘requires improvement’.

It stated that “the organisation failed to carry out disclosure and barring services (DBS) checks for some new staff and too many of them did not have a current DBS check in place prior to inspection”.

Managers had ensured, the report added, that these staff did not have unsupervised access to young people as soon as the issue was identified.

However, concern was also raised that “the designated safeguarding officer and team who would routinely have access to sensitive information have not completed an accredited training programme leading to a qualification or appropriate DBS”.

Rob Marr, managing director of t2 group, which includes Marr Corporation Limited and was allocated £13.8m by the Skills Funding Agency (SFA) as of April this year, conceded that “DBS checks on some new members of staff, who were not carrying out regulated activity and who represented just 5 per cent of our workforce, were not carried out in a timely fashion”.

But he said: “We carried out an internal investigation into the source of the problem, which became a disciplinary matter.

“We have since strengthened our internal procedures by implementing all staff recruitment recommendations within three days of the inspection taking place.”

When asked by FE Week if he expected that t2 would be allowed to continue running its ‘outstanding’ traineeships following the grade three overall Ofsted rating, he said: “It is our understanding that we can continue to deliver [them] this year. However we will be unable to grow our provision.”

An SFA spokesperson said: “If a provider [such as Totton College] is currently eligible and delivering traineeships, but receives a grade three Ofsted inspection, they can continue to deliver but only under certain conditions regarding the growth of their programme.

“However, if providers with a grade three fail to receive a grade one or two on their next inspection, they would no longer be eligible to deliver.”

The Ofsted report stated that t2 was running around 4,300 intermediate, 2,900 advanced, 400 higher apprenticeships, and 40 traineeships at the time of the inspection.

A report has also today been published on the first re-inspection monitoring visit to Totton College since it was rated ‘inadequate’ by inspectors in June and plans were announced for it to be taken over by national crime prevention charity Nacro from November.

It said that Totton’s senior leaders had “sensibly refrained” from developing a post-inspection action plan (PIAP) in view of the “transition period” to overall Nacro control, it added.

But the report said that work had started “on identifying the key issues relating to, and the root causes of, the college’s poor performance in 2014/15, and this now needs to proceed quickly”.

Senior leaders, the report added, were forecasting approximately half as many enrolments at the start of 2015/16 as in 2014/15.

It comes after FE Week exclusively revealed on June 26 that the government had paid a “one-off settlement” to write off the pension liabilities of the cash-strapped sixth form college as part of a deal to remove it from the public sector.

The Education Funding Agency (EFA) paid Hampshire County Council the undisclosed figure, believed to run into millions, to prevent pension liabilities from being transferred to Nacro, which improved from an ‘inadequate’ Ofsted rating in March 2013 to ‘good’ last June.

A merger has been on the horizon for the college, that had around 1,700-learners in June, since last December — when former principal Mike Gaston said it was looking at its options after sixth form college commissioner Peter Mucklow warned it could not function alone and it was placed under Financial Notice to Improve by the EFA.

An EFA spokesperson said that Nacro, which had around 3,200 learners in June, was “working closely with Totton College to address the priorities identified in the report”.