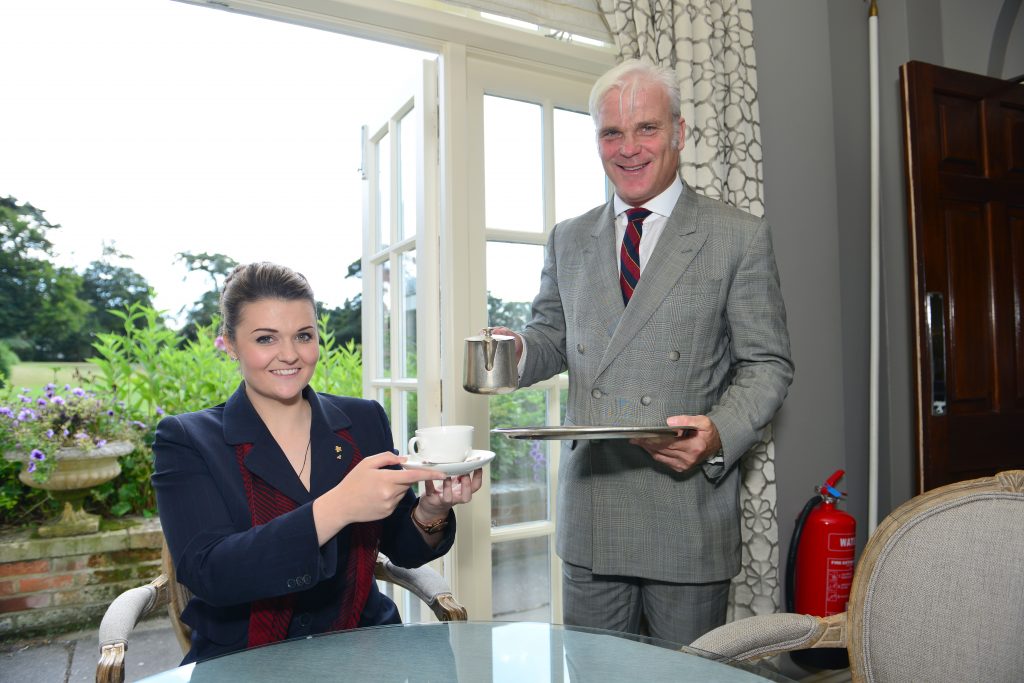 The UK’s WorldSkills competitors are set to head off for Brazil tonight — and a number of them will be boarding the BA flight from Heathrow with the encouragement of their local MPs still ringing in their ears.

With the much-anticipated start on Tuesday (August 11) growing ever nearer, seven of the UK competitors were given the House of Commons boost.

Lucy Jones, the 21-year-old restaurant services competitor for Team UK who goes to Hampshire’s Brockenhurst College and works at Chewton Glen Hotel and Spa, was treated to tea with New Forest West MP Desmond Swayne (both pictured above).

He said: “Lucy has done incredibly well to make it into Team UK. It’s a great achievement and I’m looking forward to seeing how well she can do in Brazil.

“Her success demonstrates the opportunities WorldSkills UK skills competitions provide for young people. Through competing she has learned a lot and this has helped her career, enabling her to carry out an important role in a thriving local business.”

Chichester College’s cabinet-making competitor Edward Harringman, aged 22, and employed by Harringman Cabinet Making, met up with Hastings and Rye MP Amber Rudd, who said she was keeping her “fingers crossed” that returns with a medal.

“I wish Edward all the very best for WorldSkills Sao Paulo 2015,” she said.

“Edward’s success demonstrates the value of vocational education as a viable first choice for school leavers. Not only has he learned and developed a skill to a high standard thanks to excellent teaching at college, he is now the owner of a successful local business.

“I look forward to seeing more young people in my constituency having a go and following in Edward’s footsteps.”

“I was delighted to meet Rob recently and to hear about his achievements,” she said.

“He is an inspiration to his and future generations and is proof that vocational learning can lead to great opportunities and successful careers. I wish Rob and the other members of Team UK the best of luck for the competition – I am sure you will do our area and our nation proud.”

Joinery competitor Dale Hodgins got the chance to meet Gloucester MP Richard Graham, who was “delighted” to see the 22-year-old represent the constituency and Team UK.

“Let’s all get behind Dale and show the world what Gloucester can make,” said Mr Graham.

Dale is an Oxford & Cherwell Valley College learner and is employed by Oakleigh Joinery.

Mr Hall said: “Mike is an inspiration to future generations of the UK’s workforce.

“His achievements prove that apprenticeships can lead to great opportunities and successful careers for individuals and businesses. The members of Team UK are ambassadors for our nation and I wish each and every one of them the very best of luck.”

Mike, aged 21 and from City of Bristol College and who works for GKN Aerospace, said: “I think WorldSkills will be an amazing experience but it will be an intense week and very hard work. I have been training very hard for it so can’t wait to finally get there and meet everyone.”

She said: “Matt is an inspiration to future generations of the UK’s workforce. His achievements prove that vocational learning can lead to great opportunities and successful careers for individuals and businesses. The members of Team UK are ambassadors for our nation and I wish each and every one of them the best of luck at WorldSkills São Paulo 2015.”

Matt, who works for Beesley Landscapes, said: “Being selected for WorldSkills São Paulo 2015 is an incredible honour and is something I’ve been working towards personally for over two years. I have spent every spare minute training for the competition and I am determined to give it my all.”

Shayne showed Mr Howell how to repair rotor blades and wiring looms as part of what is needed to keep front-line helicopters in the air.

“These skills are vitally important to the safety of aircraft and it is very good that the Royal Air Force is supporting them,” said Mr Howell.

“This is one of the few places that provide this level of training. They are to be applauded.”

Shayne said: “The goal is to be the best young aircraft engineer in the world. I don’t think there is a bigger prize than that.”