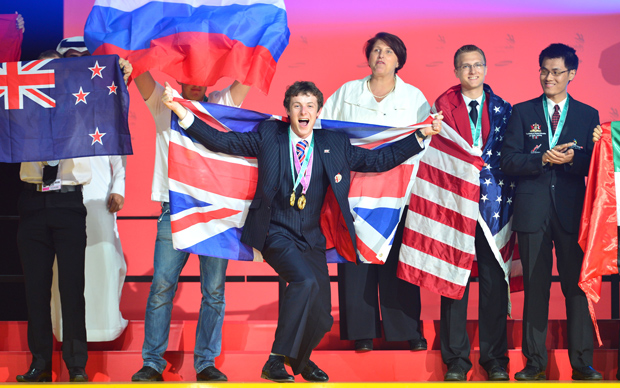 Young apprentices preparing to head for WorldSkills Sao Paulo 2015 in just over a week’s time have battled against hundreds of other competitors to earn their places among Team UK.

But, former cabinetmaking competitor and WorldSkills Leipzig 2013 gold medal winner George Callow (pictured above) has advised this year’s contender crop to remember the most important part of their support network will now come from team-mates.

George told FE Week: “The best bit of the competition was when the countdown from ten seconds down to zero started and I put my head up from my workbench and just saw all of my friends and family and all my WorldSkills colleagues, the rest of the team, were cheering me on to the finish.

“And it was amazing because until then I didn’t know anyone was there and I didn’t even look at the crowd, but there was this huge crowd of people cheering and it was incredible.”

The sense of camaraderie that had developed between the team members had been really important to him on his quest for gold, he said.

“Because they were all on different trades I could talk to them, and relax and ask them questions and go through things with them and if they’d had problems during the day we’d talk them through and support each other,” he said.

“They know nothing about my skills but they know a hell of lot about the experience of the competition and the pressure — probably more than anyone else.”

“It’s a massively important part of the support — there was a bit of family vibe by the end of it.” Former Chichester College learner George is planning to accompany the team to Brazil as part of the alumni delegation and is planning to catch up with some old friends.

“I’m looking forward to going out there and meeting up with some of the other competitors — I’m still friends with many of them,” said George.

And he’s looking forward to checking out some of the other competitions.

“I only saw my arena last time,” he said. “I didn’t see any of the other competitions so I’m very intrigued to see how it’s going and what they actually look like.”

Like George, FE Week will be joining team UK at WorldSkills, where competitions will take place across four days from August 12.