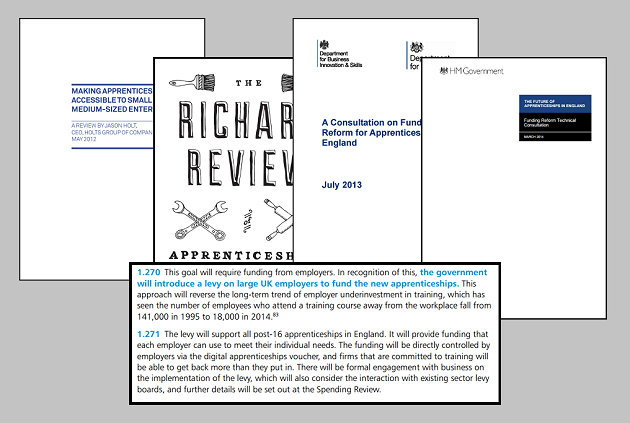 The government is set to embark on its fifth review of apprenticeships in just four years after plans for a levy on large businesses to fund growth were announced in the summer Budget.

The Department for Business, Innovation and Skills (BIS) confirmed it would run a consultation on its plans for the levy before announcing further details — such as how it will decide which businesses must pay and how much — in the Spending Review this autumn.

It follows four apprenticeship-related consultations in the last Parliament, with businesses and training providers consulted during a 2012 review by Holts Gems chief executive Jason Holt and a consultation sparked by Dragons’ Den investor Doug Richard’s review the same year, and then two further consultations on funding reform in 2013 and 2014.

A BIS spokesperson told FE Week it would be engaging with stakeholders about the levy plans, but said there was no more detail yet on the format or timings of the consultation. An apprenticeship levy, but for all employers rather than just “large” firms, was put forward just a week ago by Professor Lady Alison Wolf, who authored a 2011 government review of vocational education.

Another proponent has been Association of Colleges president Richard Atkins, who said Chancellor George Osborne “deserves credit for introducing an employer’s contribution to the costs of apprenticeships which I and others have long argued for”.

“As someone who was trained and achieved vocational qualifications 40 years ago because my employer worked hard to ‘earn back’ the levy they paid, I know how effective a levy system can be in encouraging employers to train their staff,” said Mr Atkins.

“When implementing this new policy government needs to take care to minimise bureaucracy for employers, whilst doing all they can to persuade the 48 per cent of employers who say they do not train, to change their approach quickly.”

Association of Employment and Learning Providers chief executive Stewart Segal said: “Our view is that the levy proposals will need time to develop and implement effectively.  In the short term, we should focus on growing the programme and work towards a new way of funding Apprenticeships once that growth is embedded over a period of the next three or four years.” Professor Ewart Keep, director of the centre for skills, knowledge and organisational performance at the University of Oxford, said the levy was “unexpected” and a “radical” departure.

He said: “Many large employers, especially those in sectors like retailing will be very unhappy, but the government faces three problems, all of which it thinks might be solved by a levy.

“First, as Alison Wolf’s proposals suggested, there isn’t enough public money to fund an expanded and upgraded apprenticeship system. Second, employers were being expected to pay a third of the costs of new apprenticeships up front on a voluntary basis, and it was clear that many were not willing to do this.

“Finally, a levy provides a financial incentive (using employers’ own money) for firms to get the cash back by offering apprenticeship places and thereby allowing government to meet its target of 3 million new apprenticeship starts by 2020.

“The devil will be in the detail of designing the levy system, in a potential backlash by employers, and in the ‘gaming’ of any new funding system by consultants and training providers, who might try to help employers re-badge existing initial training as new apprenticeship places.”

The Social Market Foundation (SMF), which produced the Fixing a Broken Training System report in which Professor Wolf put the levy idea forward, has argued that under current funding arrangements, 3m new apprenticeships would leave funding of only £2,567 available per apprentice.

Only two apprenticeship frameworks, out of more than 200, receive government support below £3,000 at the moment, it said, meaning that, without a change to funding, increasing apprenticeship numbers would reduce the quality of what is on offer. It has estimated that a levy set at 0.5 per cent of payroll for large companies would raise around £2bn per year.

Emran Mian, SMF director, said: “The funding available per apprenticeship was about to nosedive with the Government determined to grow the number of apprenticeships very significantly.

“By contrast, the new levy will mean that the funding available per apprenticeship can potentially be increased beyond current levels. This will support higher quality training and productivity improvements.

“There may however be winners and losers among employers with those in manufacturing and engineering sectors potentially standing to gain a lot more funding for training while those in service industries see less of the money from the levy coming back to them.”