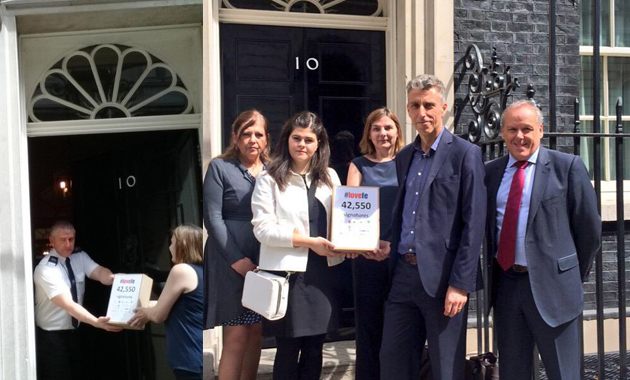 Sector leaders have this morning handed in a petition to Number 10 Downing Street that was signed by more than 42,500 opposed to “unfair” and “harmful” FE cuts.

Sally Hunt, University and College Union (UCU) general secretary, and Martin Doel, chief executive of the Association of Colleges (AoC), were among a group of senior figures who handed the petition opposing drastic funding reductions to an aid of Prime Minister David Cameron.

They were joined by David Hughes, chief executive of the National Institute of Adult Continuing Education, Christine Lewis, lead on further education and school meals at Unison, Megan Dunn, who was elected as president of the National Union of Students in April, and Mark Baker, president of  the Association of Teachers and Lecturers.

It followed a mass lobby event on June 17 of the Houses of Parliament, organised by the University and College Union (UCU), which gave FE staff the chance to explain directly to their MPs the impact the reduction in the adult skills budget (ASB) was having on their classrooms.

After the petition was handed over, Ms Hunt said: “The strength of support for this petition clearly shows that people care about adult learning and want to ensure that it remains a vibrant and dynamic part of our education system.

“The government needs to listen to their concerns and rethink the damaging cuts which will lead to hundreds of thousands of people losing out on opportunities to improve their life chances.”

Mr Hughes said: “The cuts to FE are unfair and unjust and are going to be harmful to our society.

“The petition is an opportunity for people to express their anger at frustration at what is happening.

“The fact that 42,550 took the trouble to fill it out shows how much strong feeling there is about this.”

Mr Doel said: “The AoC has already expressed its concerns about the future of adult education and skills training if the Government continues to cut its funding.

“We’re pleased to support the UCU in raising awareness with Ministers about the importance of adult skills training. Without it, many people will struggle to change careers or to boost their skills in the workplace and in the long term this could be damaging to the UK economy.”

It has been estimated that the adult skills budget has been reduced by 35 per cent since 2009, and funding for adults over the age of 19 on non-apprenticeship courses is set to be slashed by up to a further 24 per cent in 2015/16, as was announced in March.