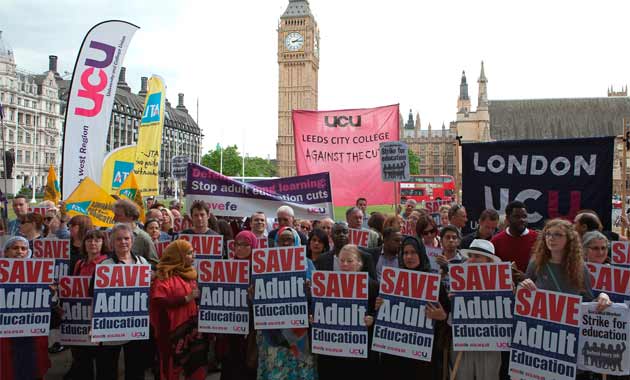 Hundreds of staff and students from FE colleges descended on Parliament yesterday as part of an FE Week-backed campaign against funding cuts to adult education.

It has been estimated that the ASB has been reduced by 35 per cent since 2009, and funding for adults over the age of 19 on non-apprenticeship courses is set to be slashed by up to a further 24 per cent in 2015/16, as was announced in March. Sussex Coast College A-level history lecturer Justin Wynne was among the protesters and he said the cuts were “devastating” and were having a “detrimental effect” in his college already.

“We are seeing increasing class sizes to create efficiency savings,” he said. “Which although it’s not necessarily a bad thing in some areas is going to have a detrimental effect in some areas, particularly A-level, where class sizes will increase into the late 20s and 30s.”

“The amount of time students get too – ideally students are supposed to have 540 guided learning hours, but to make efficiency cuts, they’re increasing how much you deliver in a week to get the most out of each member of staff, increasing their workload therefore the balance between work and home is damaged, increasing stress.”

“There’s definitely been an impact on the front-line work I’m doing – there’s less support for people who need the support and there are plenty of them,” she said.

“There are redundancies, fewer teachers, disenchantment, people don’t feel valued, students are not getting the best service that they can and neither are the teachers that work there.” Sally Hunt, UCU general secretary, said around 200 MPs — more than a third of England’s MPs — were contacted as part of the event.

She said it was “a lobby very early on [in the Parliament] that will be telling MPs about how much we care about FE in our communities and how very, very scared and angry we are as representatives of those colleges about what this government is doing to FE”.

She said: “It is not enough to say ‘we care about FE and we want to protect it’.

“What we need out of today are positive substantial commitments from your MP to say they will do every thing they can, in the chamber, with this government, with the relevant departments to lobby on our behalf to protect what we know is an important part of every town.”

The event was backed by Green MP Caroline Lucas. She said: “I think it’s no exaggeration to say that the very existence of adult education is in jeopardy.”

He said: “I am not for a minute suggesting full time FE courses don’t have a positive impact, they do, but their positive impact on people’s earnings are not as high, not nearly as high, as apprenticeships.”

A UCU petition calling for the cuts to be reversed, and believed to have been signed by more than 42,000 people, is expected to be handed in to Parliament in the next few weeks.