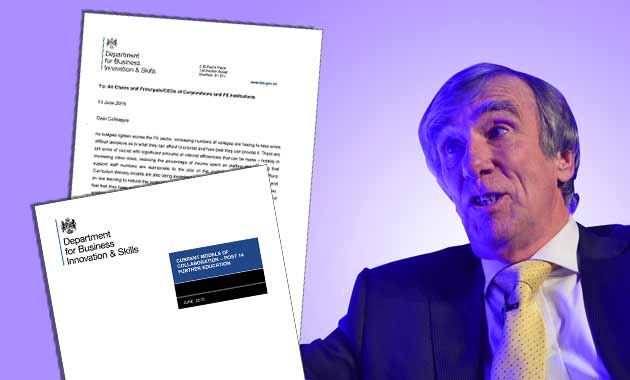 Further Education Commissioner Dr David Collins has issued a 38-page guide to college mergers as he acknowledged “there is clearly not enough money for the sector to continue as it is”.

In an accompanying letter to college chairs, principals and chief executives, he offered his view of the sector landscape as one in which “rationalisation and collaboration is the new order of the day”.

He said “significant amounts of internal efficiencies” were still possible at some colleges, “notably in increasing class sizes, reducing the percentage of income spent on staffing and ensuring support staff numbers are appropriate to the size of the institution and what it can afford,” and that technology was also being explored as a means of reducing costs.

But, he said: “More and more colleges, however, feel that they gone as far as they can in these areas and are beginning to explore ways of working more closely together, rationalising their offers and ensuring greater value for money.”

He added: “The truth of the matter is that there is clearly not enough money for the sector to continue as it is and rationalisation and collaboration is the new order of the day.”

Dr Collins went on to outline how his team had carried out a number of structure and prospects appraisals (SPAs) in its first 18 months. “In a number of cases the outcome of such an SPA has been a merger or federation,” he said.

Among such mergers has been Norton Radstock College, which was visited by the FE Commissioner after an inadequate Ofsted rating, with City of Bath College, to become Bath College two months ago.

Meanwhile, Newham College, Tower Hamlets and Redbridge College are forming the Federation of East London Colleges, and Exeter College and Petroc College, both in Devon, are also in talks.

Among the report’s three other FE Commissioner adviser authors was Phil Frier who, shortly after taking over at debt-ridden K College as interim principal two year ago, said its merger three years earlier had failed. He then oversaw its successful break-up last year.

Nevertheless the advisers’ investigation resulted in a number of conclusions, ranging from “there is no one ‘right’ structural model for colleges” to “the success of any model is in planning and implementation”.

It was also concluded that “bringing institutions or systems together does not necessarily mean that everything has to be harmonised and uniform” and “following the ‘technical’ start date of the new structure, leaders need to be highly visible to their new teams and strongly focused on delivering their planned benefits”.

Dr Collins said: “In summary, new collaborations and new structures tend to be successful where the decision to change has been taken on logical and evidence-based grounds, subject to rigorous assessment and careful implementation.

“They can create valuable economies of scale, protect and improve student access and progression, and address issues of poor quality.

“There is much good practice in the sector about how to ensure that these important features are realised, and a willingness by those who have gone through the process to share their views and experiences with others.

“For those beginning to consider this route, a phonecall or visit to those who have come together successfully could pay dividends.”