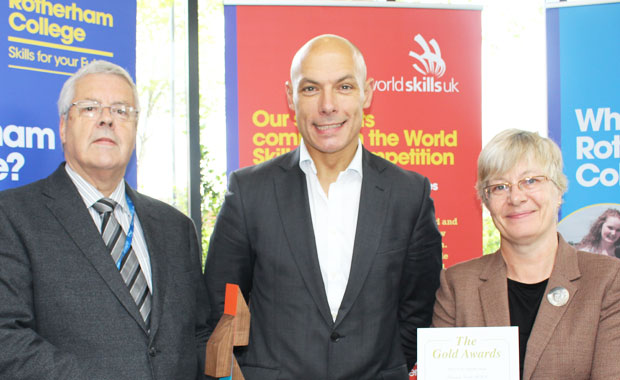 Former international football referee and Rotherham College alumni Howard Webb has been recognised by the Association of Colleges (AoC) for the role that FE played in his career.

He was presented with a Gold Award at a ceremony held by his former college.

“I’m absolutely thrilled and delighted to have won, it’s not something I expected,” he said.

Mr Webb studied French at Rotherham from 2005 to 2007 to be able to speak with more international players.

“For me, just having a better chance of communicating with overseas players gave me an advantage in my career,” he said.

He’s now the technical director of the Professional Game Match Officials Board.

Main pic: Ken Barrass (left), chair of the Corporation at Rotherham College, presents Howard Webb with his the gold award. Also pictured is AoC regional director for Yorkshire and the Humber Caroline Rowley