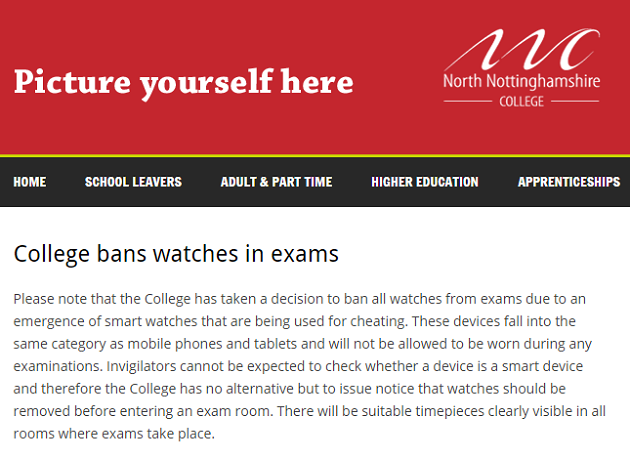 An East Midlands college has issued an exams blanket ban on wristwatches over fears learners could cheat using powerful new “smart watches” that can access the internet.

A North Nottinghamshire College (NNC) statement on its website says candidates will be banned from wearing their watches in all exams following the “emergence of smart watches that are being used for cheating”.

Such watches are already banned by the Joint Council for Qualifications (JCQ) for A-levels and GCSEs.

It represents awarding organisations AQA, City & Guilds, CCEA, OCR, Pearson and WJEC, and has issued guidance for providers that candidates should be stopped from taking “any potential technological/web enabled sources of information” and specifically “any wrist watch which has a data storage device” into exams.

But NNC director of quality David Barnett told FE Week the college had gone a step further and banned all watches, for all exams, because “advances in technology” made it harder to differentiate between smart and ‘normal’ watches.

Mr Barnett said: “Previously we have felt we have been able to identify these types of watches through the use of invigilators.

“Obviously, with GCSEs we have a high volume of exam entrants, and with the advances in technology it is more difficult to tell the difference between types of watches, as a lot of the smart watches look like normal analogue watches.

“All candidates already have a mobile phone pouch on their desks, and we are asking them to put their watches in there too.

“It just seems like the best way of dealing with these advances in technology without causing disruption.”

Mr Barnett said the college had conducted research into online shops which marketed smart watches as “cheating watches,” and said staff had come across watches with internet functions which could be linked to mobile phones which looked like “round, analogue watches”.

JCQ director general Michael Turner confirmed that smart watches were already banned from exams and that no new guidelines banning watches entirely had been issued.

He said: “I’ve checked with colleagues and nothing has been issued to centres regarding the banning of watches in examinations.

“The use of i-watches and other similar devices are already covered by the regulations.”

It comes after exams watchdog Ofqual announced it had seen a rise in penalties issued to college and school candidates for possessing a banned electronic device. For the summer exam period last year, Ofqual issued 850 such penalties, compared to 810 in 2013.

But the data issued by Ofqual is not broken down by type of device.