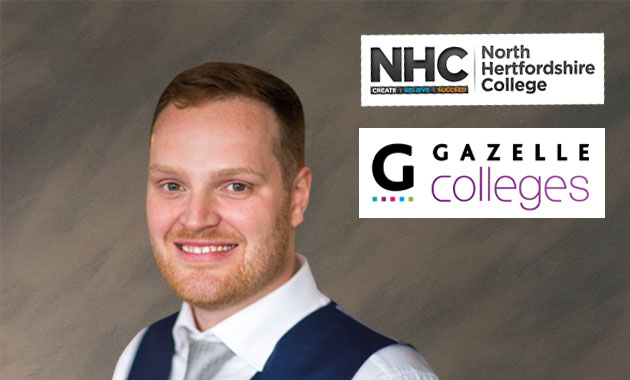 Gazelle has been dealt a major blow with news that a key founding college has announced it is “no longer an active member,” FE Week can exclusively reveal.

Fintan Donohue said he was “naturally disappointed” that North Hertfordshire College (NHC), where he was principal and chief executive when he set up Gazelle in around 2011, was ending its membership.

And FE Week has learned that only City College Norwich (CCN) of the other four founder colleges was prepared to commit to staying with Gazelle for the rest of the year. Of the remaining 13 members, only four told of their commitment to staying on with Gazelle.

Matt Hamnett (pictured above), NHC principal since March when he replaced Signe Sutherland, told FE Week: “We are no longer an active member, though as a founder college we retain an interest in work currently being undertaken to review how Gazelle is structured and moves forward.

“It is clear that Gazelle played an important role in our shift towards a more work-focussed, project-based model. As we look to the future though, we believe we can more effectively access innovation and drive continuous improvement outside of Gazelle.”

Mr Donohue, Gazelle chief executive, said: “We are naturally disappointed that NHC no longer wishes to be a member of Gazelle. They have made a hugely valuable contribution in shaping the work of Gazelle and assisting other colleges across the network, particularly in the area of curriculum innovation.” An FE Week investigation revealed in June last year that the group’s five founding colleges — which also include Warwickshire College Group (WCG), Gateshead College, and New College Nottingham (NCN) — dished out more than £530,000 each to set up Gazelle, according to figures obtained from Freedom of Information Act requests. Along with other colleges, they also paid £35,000 in annual membership costs.

The announcement by NHC follows departures from the group of Lewisham Southwark College, Middlesbrough College, The Sheffield College and Peterborough Regional College at the turn of the year.

A 24-page impact report, produced by the Policy Consortium, was commissioned by Gazelle and then unveiled by Mr Donohue in January. However, the report was criticised by the University and College Union for not assessing whether, in light of worsening public funding pressures, member colleges’ spending on Gazelle of £3.5m-plus in public funds had affected Ofsted grades.

At the time, Mr Donohue also said Gazelle would be reviewing its membership offer. And after the NHC membership blow for Gazelle, he said it was “undertaking a major membership review, which is likely to lead to a more streamlined structure” and hoped to complete this by the end of July.

“Our purpose will remain the same — to give students the option of making as well as taking a job and to help colleges diversify income — but we need to change in order to better reflect the financial pressures facing colleges and respond to the independent impact report, published earlier this year,” he said.

“That report challenged Gazelle to work more closely with members to improve communication, both internally and externally, simplify the structure of the organisation and continue to ensure value for the future.”

Only five, including CCN, of the remaining 17 member colleges have now committed to staying with Gazelle, after FE Week asked each about their intentions. The others were Barking & Dagenham College, Activate Learning, in Oxford, Preston’s College, and Cambridge Regional College.

A CCN spokesperson said it looked “forward to continuing to work with the group of like-minded colleges for the remainder of this calendar year and beyond”. However, fellow founders WCG and Gateshead both said they were “involved in the membership review” and “will finalise our decision upon its completion”. A spokesperson for the other founder, NCN, declined to comment.

Of the remaining members, Bath principal Matt Atkinson said it was “proactively working with our colleagues to see how we can continue to derive the benefits of membership albeit for a more affordable fee”. Moira Tattersall, principal of Carlisle, said future membership was “dependent upon receipt” of the review proposals. A Glasgow Kelvin spokesperson said it “reviews subscriptions on an annual basis and continued membership will be considered as part of this process”.

A spokesperson for Amersham & Wycombe said it would make a decision “by the end of the academic year,” while Cardiff & Vale said its executive team had not yet reviewed future membership. A Plymouth spokesperson said it “continues to be a member”, but declined to comment on long-term plans.

See below for full college responses.

It’s just under a year ago that a hard-hitting FE Week report laid bare the extent of five colleges’ extensive spending of public money on setting up Gazelle.

It was more than £500k each at that point, more than a year into Gazelle’s existence, and yet there was no hard evidence that such huge investments had been worth it.

A year later and there is still no such evidence of a return on those investments, which have been added to with renewed £35k membership fees in the interim despite the increasingly straitened financial times.

It has always been the case that Gazelle could call upon the full support of FE Week if and when it presents evidence of a return on investment, but it seems the wait for this has proved too much for North Hertfordshire College and its membership has ceased.

It was the sixth college to leave Gazelle over the last year. Seventeen remain, but commitment appears to be faltering despite a review of the models and costs of membership that could result in a very different organisation.

However, this should not be taken as a lesson pointing to the avoidance of innovative thinking or the fostering of entrepreneurialism in the sector. These are key, especially for a sector struggling to survive.

More, it should be taken as a lesson in the importance of accounting for public funds and proving the worth of projects.

Sally Dicketts, chief executive of Activate Learning, said: “We remain committed to the Gazelle Group and have gained considerably from our membership.

“In fact, just last week business students from across our three colleges took part in an enterprise project led by Gazelle, which enhanced their learning and which they found it extremely valuable.”

A Barking & Dagenham spokesperson said: “The college is a member of the Gazelle Colleges Group, and has no plans to change this status.”

Anne Constantine, principal and chief executive of Cambridge Regional College, said: “We will remain as a member of Gazelle.”

A Cardiff & Vale College spokesperson said: “I can confirm that we are proud members of the Gazelle group and that our students have seen real benefits as a result of our membership.

“I cannot say what our plans for the rest of the calendar year regarding membership at this time as it is not something that the executive team has reviewed.”

Moira Tattersall, principal of Carlisle College, said: “Our future membership of the Gazelle college group is dependent upon the receipt of proposals regarding future fee structure and the services that will be provided, which will be reviewed on a cost-benefit basis.”

A spokesperson for City College Norwich said: “The college continues to participate in Gazelle college group activities and looks forward to continuing to work with the group of like-minded colleges for the remainder of this calendar year and beyond.”

A City College Plymouth spokesperson said: “The college continues to be a member of the Gazelle college group.”

Matt Atkinson, principal of City of Bath College, said: “The college continues to be a member of the Gazelle colleges group and remains committed to working in partnership with other members of the network to improve the learning experiences of all of our students.

“We are currently actively participating in the membership review that is underway and are proactively working with our colleagues to see how we can continue to derive the benefits of membership albeit for a more affordable fee at a time when college funding is decreasing.”

A Gateshead College spokesperson said: “We are involved in the membership review that is on-going and will finalise our decision upon its completion.”

A Glasgow Kelvin College spokesperson said: “The college remains a member of the Gazelle group of colleges and has planned a major continuous professional development event in June for our staff in collaboration with other Gazelle group members.

“However, the college reviews its subscriptions on an annual basis and continued membership will be considered as part of this process.”

Matt Hamnett, principal of North Hertfordshire College (NHC), said: “NHC is no longer an active member of the Gazelle Colleges Group though, as a founder college, we retain an interest in work currently being undertaken to review how Gazelle is structured and moves forward.

“It is clear that Gazelle played an important role in our shift towards a more work-focussed, project-based model for teaching and learning.  As we look to the future though, we believe we can more effectively access innovation and drive continuous improvement outside of Gazelle.”

A spokesperson for Preston’s College said: “The college is still a member of the Gazelle group and will remain so for the foreseeable future.”

A Warwickshire College Group (WCG) spokesperson said: “WCG is involved in the membership review that is ongoing and will finalise our decision upon its completion.”