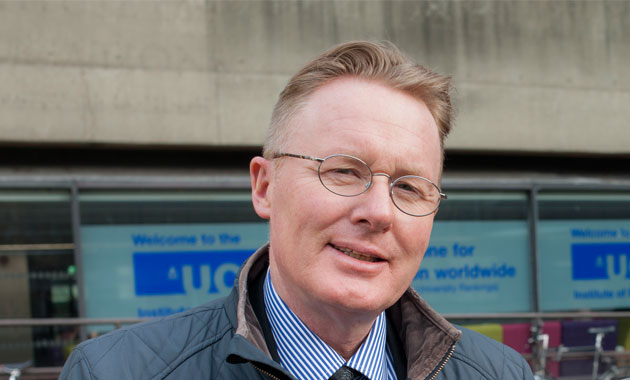 The chief executive of the Further Education Trust for Leadership (Fetl) is standing down with his post having grown to “take much more of my time than I originally expected,” FE Week can reveal.

The Fetl appointment of former National Institute of Adult Continuing Education (Niace) policy director Mark Ravenhall (pictured above) was announced in July last year, as reported in FE Week. However, he announced last night that he would be leaving Fetl this month. Mr Ravenhall told FE Week: “I am proud to have been part of the beginnings of Fetl and think that we have achieved a great deal in its first year.

“Therefore I have made the decision to step down so that I have sufficient time to fulfill my other commitments and interests.”

Jill Westerman (pictured right), principal of the Northern College and chair of Fetl, said it was a “mark of his success that the level of interest has been so high, which has meant that the work of Fetl needs more time and attention than we originally envisaged for this part-time role”.

Among the key roles of Mr Ravenhall at Fetl has been to oversee its first round of grants for research, and the names of the first five organisations to receive a total of £270,000 in Fetl grants to fund research were announced in March.

Applications from the Association of Employment and Learning Providers (AELP), Coleg Gwent, EMFEC, the University of Hull, and Working Well were chosen ahead of 51 other applicants.

EMFEC, a membership body for providers in the East Midlands, is developing new models of leadership through innovative governance, while AELP is investigating the impact of new leaders on the leadership of thinking in FE.

Coleg Gwent is looking at the impact of austerity measures on provision and in particular the role of governors in fostering a culture of enterprise and innovation. The University of Hull will aim to develop a practical understanding of behaviours and approaches adopted by ethical leaders in FE.

Working Well, a private sector company that specialises in organisational development, will develop a series of strategic seminars that focus on psychoanalysis and systems thinking and their applicability to FE.

The announcement came after Fetl, which was launched last summer with a budget of up to £5.5m left over following the closure of the Learning and Skills Improvement Service, announced in January the names of the first four individuals it had chosen for research fellowships.

Alex Day MBE, Ruth Allen, Tim Ward and Ann Creed got up to £40,000 each to fund their research on attitudes to risk in leadership of sixth form colleges, leadership challenges among third sector providers, the impact of leadership on part-time teachers and fostering creative leadership in FE, respectively.

Nevertheless, Mr Ravenhall said that he would continue to support Fetl through its current funding round and “while the board makes its arrangements to cover my post”.

“I want to thank the Fetl board and our small team of dedicated staff for their help and support over the time I have been involved,” he added.

“I am sure the trust will go from strength to strength under new leadership.”

Ms Westerman said: “The trustees of Fetl are very grateful to Mark for his work in setting up the trust and launching the first round of fellowships and grants.

“It is a mark of his success that the level of interest has been so high, which has meant that the work of Fetl needs more time and attention than we originally envisaged for this part-time role, and we understand that it has become increasingly hard for Mark to meet the other commitments he wishes to honour. ”

She added:  “The board plans to make interim management arrangements to take forward the work of Fetl until a permanent appointment can be made. Mark will be working alongside us to ensure a smooth handover so that the growing work of Fetl to support the leadership of thinking in our sector is sustained and developed even further.”