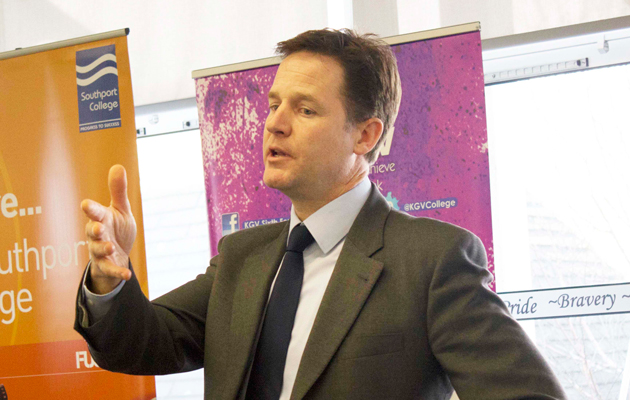 The Liberal Democrat leader is set to announce his ambition to get an extra 100,000 young adults into work, education or training.

Speaking to Lib Dem members at a campaign rally, Mr Clegg will announce plans to establish a youth unemployment taskforce within the first 100 days of a Lib Dem government to fast-track young adults back into work or training.

He is expected to say that the number of jobless young people had been rising long before the financial crash in 2008, but that Lib Dems in government had “rescued the economy, created jobs and invested in a record 2m apprenticeships”.

He will say: “Youth unemployment is falling – by more than 110,000 in the last year. We are now within touching distance of something that has seemed out of reach for years.

“That’s why I want to set a new, bold ambition. By the end of this parliament I want us to cut youth unemployment to its lowest levels since records began.

“It is hugely ambitious but it is absolutely achievable.”

He will refer to plans announced last month to double the number of businesses hiring apprentices by increasing the number of grants available to employers and by excusing companies which hire apprentices under 25 from national insurance contributions.

He will say: “We can do it by doubling the number of businesses that hire apprentices, opening up work experience, transforming careers advice and improving mental health services.

“And above all else, we can do it by keeping our economy strong.”

A party spokesperson said their “youth unemployment action plan” would also include the introduction of one-to-one careers advice for every student and a “business in schools” strategy to enhance links between local employers and schools.