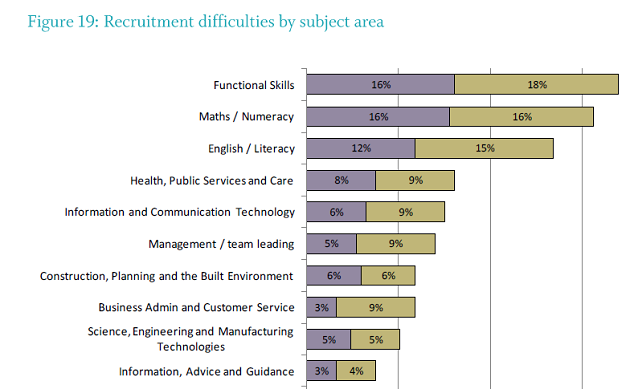 A third of work-based learning providers are finding it difficult to recruit Functional Skills (FS) teachers, a survey by the Education and Training Foundation (ETF) suggests.

The ETF has published the results of its latest annual workforce survey, which is based on responses from 186 work-based learning providers, showing that 16 per cent of respondents found it “very difficult” to recruit FS teaching staff in 2013/14, while 18 per cent found it “quite difficult”.

The results of the survey come the same month as FE Week analysis of Skills Funding Agency success rates tables, which for the first time included FS data this year, showed how nearly 40 per cent of under 19 FS enrolments at general FE and tertiary colleges and independent learning providers (ILPs) failed to achieve their qualification last academic year. The combined FS success rates for colleges and ILPs was 62.9 per cent, with 203,680 enrolments out of 323,320 achieving their learning aims — meaning 119,640 did not.

It prompted a call from a range of academics for the government to provide added support for FS teaching to boost 16 to 18 success rates from 64.3 per cent for general FE and tertiary colleges and 52.9 per cent for ILPs.

Among them was University of Wolverhampton education lecturer and researcher Dr Matt O’Leary, who told FE Week: “I don’t think these success rates are lower than might be expected — that’s not to say they shouldn’t be higher, but in order to improve them then there needs to be recognition on the government’s part that they have a responsibility to invest in adequate resources to enable the FE sector to staff these courses with specialist teaching staff.”

It has also revealed that 28 per cent of the 1,637 staff identified by providers as being part-time were on zero-hour contracts. David Russell (pictured), chief executive of the ETF, said he would encourage everyone working in FE to use the data, and said he hoped more providers would take part in future years.

He said: “You might want to see how your place of work compares to the national average, or look at where the opportunities and recruitment challenges persist.

“We are planning some exciting developments to this annual dataset, and the reports that users will be able to generate from it. To achieve this we need to ensure as many organisations as possible contribute to the process.

“I hope that leaders and governors will use it as part of their annual planning and most importantly I hope that your organisation commits to contributing to it in future years. With sector wide commitment to data collection we can identify specific issues and support smart sector-wide solutions. Without provider support on data collection we are all in the dark.”

A separate survey of adult and community learning providers revealed part-time contracts remain prominent in that area of the sector, with respondents reporting that 83 per cent of staff were part time in 2013/14, setting it at odds with the work-based learning results.

However, a pattern does emerge when comparing the proportion of teachers with relevant teaching qualifications, with a decline also seen in the adult and community learning sector, from 84 per cent in 2011/12 to 75 per cent in 2013/14.

The survey also reported a big slump in the proportion of staff on zero-hour contracts.

A report on the results said: “The option of reporting staff as engaged on zero-hour contracts was included for the first time in the 2012/13 survey and almost a quarter of teaching staff were identified as falling into this category.

“This pattern does not appear to have continued in 2013/14 with just 5 per cent of teaching staff identified as being retained on this basis,” it said in the latest report.