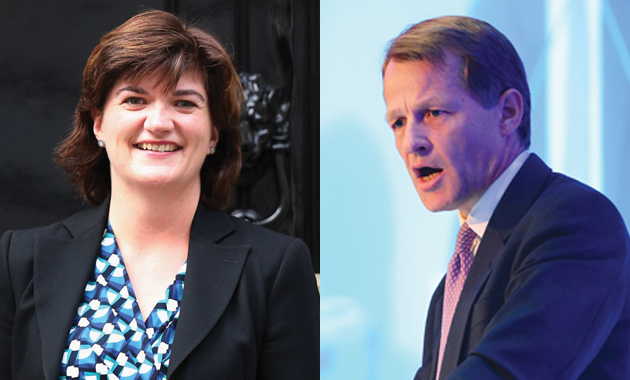 Funding increases, University Technical Colleges (UTCs) near every English city, a commission on funding for lifelong learning and millions of apprenticeships were on the agenda as the two Coalition parties went head-to-head with their general election manifestos.

The Conservatives and Liberal Democrats may have presided over the same education policies in Government, but apart from common ground over boosting apprenticeship numbers, each party tried to distance itself from the other as they launched their manifestos a day apart.

The Tories chose UTC Swindon as the venue for their manifesto launch, which was light on new announcements for FE. Prime Minister David Cameron promised a UTC “within reach of every city” and the manifesto document announced plans to publish “more earnings and destination data for FE courses”.

When challenged by FE Week about low students numbers for UTCs following the launch on Tuesday (April 14), Education Secretary Nicky Morgan (pictured above left) was up-beat about the programme.

She said: “I think we will see an improvement in recruitment. UTCs are a very important part of our overall education offer.”

The Lib Dems, who launched their manifesto in a warehouse in Battersea, West London, the following day, pledged to factor rising learner numbers into their two to 19 budget protection, which will result in a real-terms rise in funding. They also announced plans for a cross-party commission to examine adult learning funding.

Education Minister David Laws (pictured above right) said he hoped his party would be able to increase Adult Skills Budget funding from 2017/18 after “balancing the books”.

He told FE Week: “Because we are doing something very different from the Tories after 2017/18, which is growing public spending in line with the growth of the economy, it’s going to mean we have got much more money than the Tories for areas such as that. I would aspire to that (increase in post-19 education funding) but I can’t promise it because we are defining our pledges in the terms we have defined them here today.”

The proposals sparked a mixed reaction from sector leaders. Association of Colleges chief executive Martin Doel said new UTCs should be opened only in areas where places were needed, and called on the Tories to match Labour and the Lib Dems’ extension of the funding ringfence to include 16 to 19 education.

He said: “The Liberal Democrats’ pledge to protect education funding from cradle to college is very welcome one. But simply protecting the current allocations from further cuts freezing won’t ensure a sustainable and balanced system.

“In this context we are therefore very pleased that the Liberal Democrats have committed to a series of cross-party commissions on issues such as lifelong learning, national colleges and a review of VAT rules for sixth form and further education colleges.”

Association of Employment and Learning Providers chief executive Stewart Segal warned against the “chasing of substantial volume targets” on apprenticeships and said that any expansion of the programme would have to be matched with expanded investment.

He added: “Mr Laws’ comments on starting to reverse the cuts in the adult skills budget from 2017/18 are welcome in addition to his party’s protection of the 16 to 19 budget.

“While funding for apprenticeships and traineeships is currently prioritised, we believe that funding to provide skills for the unemployed is also important to help people into sustainable employment and earn at least a living wage.”

Plans for the commission on adult learning funding were also welcomed by the National Institute of Adult Continuing Education, which called for similar in its own manifesto. Deputy chief executive Tom Stannard said: “We are ready to help any future government make the work of this commission a success.”

3m apprenticeship starts in the course of the next Parliament

University Technical Colleges within reach of every city in England

Publication of more earnings and destination data for FE colleges

Abolition of employers’ national insurance contributions for apprentices under 25

Establishment of a cross-party commission on lifelong learning funding

Increase in number of apprentices from BAME backgrounds