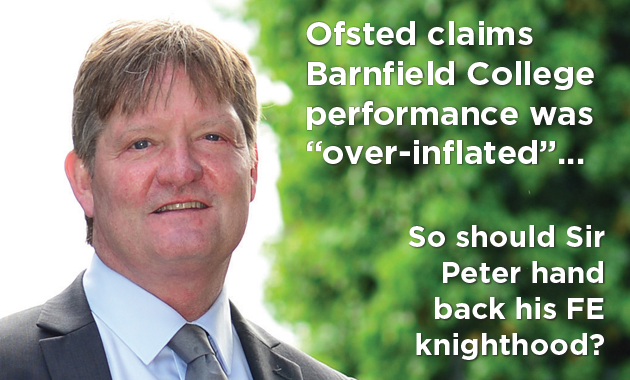 Troubled Barnfield College has been described by Ofsted as having “no key strengths” — prompting question marks over whether former principal Sir Peter Birkett deserved his 2012 knighthood for services to FE and the academy movement.

Luton South MP Gavin Shuker blamed the college’s problems — the most recent of which was a damning inadequate grading — on the federation of academies which Sir Peter set up from 2007.

“Sir Peter Birkett took an outstanding college, starved it of resources and focussed on building a network of schools that sadly has ended up with an inadequate college and that’s a tragedy,” said Mr Shuker.

He added that the honours system “recognises achievements — but these achievements have been shown to be nowhere near as effective as we originally thought.”

Indeed, Ofsted’s report told how “success rate data are now more reliable than at any time during the past year, following a period in which a number of factors contributed to an over-inflation of the performance of the college.”

Sir Peter’s knighthood had already proved contentious, with an online petition in April calling for him to rescind the honour winning the support of 183 people.

Although he left the college in July 2013, audits later uncovered a £1m funding overstatement, leading to claims of ghost learners, investigations by the Skills Funding Agency and Education Funding Agency and an FE Commissioner visit. The Luton-based college went from a grade three to four rating, with inspectors finding the college had “no key strengths” while viewing success rates, teaching and learning as inadequate.

The Department for Business, Innovation and Skills (BIS) said the result would trigger a visit from Dr Collins, whose visit in January last year followed a Skills Funding Agency (SFA) assessment of inadequate for financial control at the college.

A BIS spokesperson told FE Week: “The FE Commissioner’s assessment of Barnfield College in January 2014 recommended new financial regulations and controls be put in place urgently and changes were made to the governance and leadership.

“The commissioner has found progress in addressing financial concerns. He is now due to re-assess the college, focusing his attention on quality of provision and the actions put in place to address the issues identified by Ofsted.”

Robin Somerville, chair of Barnfield College, which is due to submit plans to BIS to split from the federation of academies built up under former leader Sir Peter Birkett from 2007, said governors “fully accepted” Ofsted’s findings.

“This is an unacceptable failure by a significant majority of the previous management, governors and teaching staff,” he said. “On behalf of the college, I have apologised to students for that failure.”

It is the latest in a series of blows for the college following government probes with auditor KPMG finding it had overclaimed more than £1m for provision that had never happened, leading to allegations of ghost learners.

Meanwhile, Dr Collins later identified a “general feeling among all levels of the organisation that the college has been relatively neglected in the previous director general/CEO’s [Sir Peter’s] pursuit of attempting to grow the overall federation into a national business”.

“The criticisms in the report reflect how poor management decisions have affected teaching and staff,” he said.

“We’ve still got brilliant staff there but they need additional resources and they need steady management which we’ve not had in recent years.”

Sir Peter, who left Barnfield in July 2013, said: “It saddens me to read the Ofsted report.”

He added: “I am not sure how this has been allowed to happen and hope senior management have now put strategies in place to rectify the points raised in the report and I wish them well for the future.”

Lydia Richards, University and College Union regional official for Eastern and Home Counties, said: “The poor leadership and financial mismanagement identified last year at Barnfield College has evidently had a negative effect on overall performance, despite continued hard work and commitment from staff.”

Interim principal Monica Box is due to step down in March for Tim Eyton-Jones, currently principal of John Ruskin College, to take over.

And Mr Eyton-Jones said: “We will be implementing a range of robust and established quality improvement models as well as some innovative initiatives to support the turnaround.”

Please note that an earlier version of this poll was reset due to people being allowed to vote more than once. This issue has now been fixed and the poll reset to zero as of 1.30pm on Saturday, January 10.