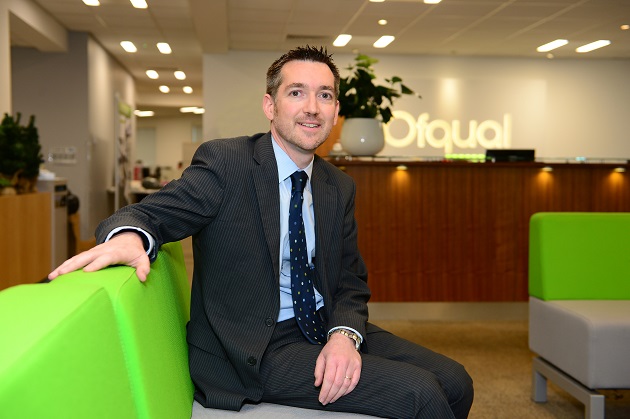 Ofqual has confirmed it is to remove the Qualifications and Credit Framework (QCF) rules.

The decision was confirmed today following a 12-week consultation and earlier review of the rules.

The change is part of the qualification watchdog’s wider plans to “strengthen” vocational qualifications in England and Northern Ireland.

The removal of the QCF rules, along with its bank of shared units, will begin from summer next year, following further consultation on technical details.

Jeremy Benson, pictured, Ofqual’s executive director for vocational qualifications, said: “We put the quality of qualifications above all else. The QCF ‘one-size-fits-all’ approach just isn’t right for every qualification.

“Ending shared units will also mean that awarding bodies take clear and sole responsibility for the quality of every single part of their qualifications.

“Vocational qualifications have an important role to play in strengthening skills and supporting economic growth.

“Removing the QCF rules means that awarding bodies will be able to design qualifications that meet better the needs of employers and respond more effectively to innovations in professional practice.

“We have listened to feedback from our consultation and won’t be introducing any changes immediately.

“Over the next few months we will be working closely with awarding organisations, government bodies and others, to enable a smooth transition that minimises impact.”

Nigel Whitehead, commissioner for the UK Commission for Employment and Skills (UKCES) and managing director of BAE Systems, reviewed vocational qualifications for the government in 2013 and said he supported the changes.

He said: “Qualifications must be high quality, flexible and responsive to employer needs. My review found that the QCF rules have been responsible for a rigid tick-box approach to assessment. Rules on unit-sharing have reduced employer involvement and sector expertise in qualifications.

“I am fully supportive of Ofqual’s new approach to regulating vocational qualifications, which puts employer involvement at its heart.

“The UKCES and Ofqual are working together to put in place the conditions that allow employers to take an effective and directive role at the centre of the vocational qualifications system.”

Stephen Wright, Federation  of Awarding Bodies chief executive, said: “[It is] difficult to comment until the statement is released, but we would hope that Ofqual has listened to the clear messages from the awarding sector about keeping the elements of the QCF that work well, not least the QCF name which we have been communicating to employers and other key groups for four years.

“[The name] is just starting to gain some recognition, also the size descriptors award, certificate and diploma were difficult to introduce, but we are through the pain and they bring clarity to the qualification structure.

“Freeing up the framework may provide an opportunity to revisit one of the original objectives of creating an overarching framework for all qualifications, including national awards.”

Charlotte Bosworth, OCR director of skills and employment, said: “We welcome the proposal to withdraw the regulatory arrangements for the QCF and to regulate using only the general conditions of recognition.

“However, during the implementation of the changes we must not lose sight of what is really important – preparing young people for further study and the world of work and helping them reach their potential. We must manage the changes carefully so that we do not jeopardise comparability.”

Graham Hasting-Evans, NOCN managing director, said: “Ofqual’s announcement was expected. What we now need to focus on is establishing an ENQF which is internationally recognised and includes apprenticeships, higher apprenticeship, GSCEs, A Level and degrees all in a single framework.”