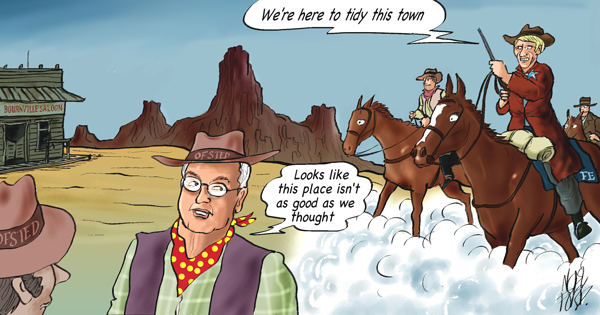 Further Education Commissioner Dr David Collins has called for change at Ofsted if it is to “be more useful” after it rated a Midland college’s leadership as outstanding despite a “critical cash position”.

Bournville College was rated as good overall by the education watchdog in May, before Dr Collins was sent in three months later after a Skills Funding Agency notice of concern issued three months before Ofsted went in.

He told FE Week that Ofsted would have been aware of the college’s financial position, but it was nevertheless glowing in its assessment of the Bournville leadership, reporting: “The board has an impressive range of expertise.”

But the commissioner said the board needed new members, specifically with reference to “financial expertise”.

The governing board has been under the leadership of new chair Alan Birks after former chair Hugh Griffiths stood down in September due to family commitment.

The college principal, Norman Cave, has also gone on leave since the commissioner’s visit and been replaced by Mike Hill, the college’s finance director, as acting principal.

A college spokesperson said the move was unrelated to the commissioner’s findings, but Dr Collins has now turned his focus onto Ofsted as he raised questions about its handling of colleges’ financial information.

Dr Collins told FE Week: “If you look at FEFC inspection reports from the 1990s, they contained some very useful comparative data. They talked about class sizes, the talked about the cost of income spent on various things, turnover.

“As a principal in the 1990s I could pick up somebody else’s Ofsted report and learn what had gone wrong and I could get indicators of what I needed to do.

“Ofsted reports now do not contain the same amount of useful information and data as they used to, so I can’t tell how many classes were inadequate, what proportion of the teaching was outstanding, what the staff costs were as a percentage of income, what the class sizes were, how their results by level compared with other colleges etc.

“So I think if Ofsted is to be even more useful than it is at the moment, it would be helpful to share that data, which they will know from their inspections.”

Dr Collins had criticised Bournville College’s “undue reliance on an ambitious growth strategy” and “little margin for error in financial projections” at the college.

Mr Hill claimed Ofsted’s view was formed because it did not take college finances into account, a fact acknowledged by Dr Collins in his report on the college.

Mr Hill said: “Ofsted judged our leadership and management outstanding because they felt that our financial situation did not impact on teaching and learning.”

A spokesperson for the Department for Business, Innovation and Skills said: “The FE Commissioner’s report raised concerns about the financial position of the college and made recommendations on the actions that need to be taken to deliver financial recovery. The FE Commissioner did not make specific recommendations about individuals in the leadership team at Bournville College.”