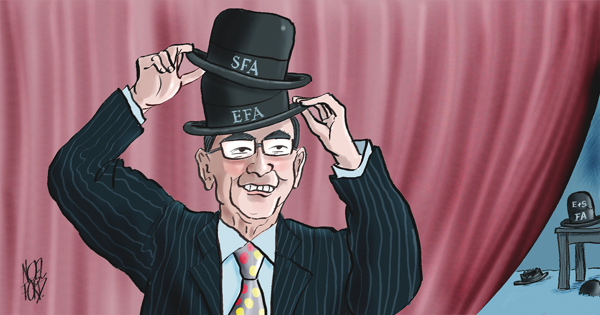 The future of the Skills Funding Agency (SFA) has been brought into question with Education Funding Agency (EFA) chief Peter Lauener taking on the running of both bodies in a move hailed by sector leaders as heralding a more “joined-up” approach.

Current EFA chief executive Mr Lauener replaces SFA interim boss Keith Smith from today, but the government has already denied the appointment indicates a merger of the two funding bodies. However, the move has nevertheless led to speculation about the potential for closer working, or even merger.

Former Association of Employment and Learning Providers chief executive Graham Hoyle posted on Twitter: “Great move. Up to Peter to develop a case for merger after the General Election and argue from the inside.”

David Hughes, chief executive of the National Institute of Adult Continuing Education, said: “This signals a more joined-up approach to learning and skills from the government, something we called for in our general election manifesto in June. Bringing together the leadership of the EFA and SFA is a significant step in the right direction.”

Peter Pendle, chief executive of AMiE (Association of Managers in Education) – the leadership arm of the Association of Teachers and Lecturers, said: “Peter’s knowledge and openness to collaborative working could very well increase the chances of a more integrated sector.”

Dr Lynne Sedgmore, executive director of the 157 Group, said: “Having one chief executive for both agencies will surely help bring about the consistency of approach for which many in FE have long argued. While we recognise the announcement does not indicate a merging of the agencies, we welcome the signal it most certainly gives that funding for our whole education system must be looked at in the round and through the same lens.”

Malcolm Trobe, deputy general secretary of the Association of School and College Leaders, said: “We already have a very good working relationship with Peter through his current role at the EFA and we look forward to continuing working with him in this new additional role. The bringing together of these two roles is a very logical step by the Coalition and should help coordinate the work of the Department for Business, Innovation and Skills and the Department for Education.”

“I am delighted to take on this [SFA] role and am looking forward to the challenge of making a difference in the skills sector,” he said. “I have a long-standing interest and commitment to apprenticeships and skills and I am keen to be involved in the next stage of reform.”

Skills Minister Nick Boles said: “Peter brings a wealth of experience in skills and in working with employers. In his new role leading both SFA and EFA, he will join up our programme of reform across the education and skills sector.”

One chief, one agency

Despite a denial to the contrary, the appointment of Education Funding Agency (EFA) chief executive Peter Lauener to the same role at the Skills Funding Agency (SFA) will lead to speculation about the two organisations’ independent existence.

A return to the days of a single body that funds under and over 18 education and training would certainly offer hope of the coherent approach to the FE and skills sector so longed-for by many.

And it looks all the more likely with the same chief executive heading the two bodies that separately fund the two age groups, from two different government departments.

A reduction in bureaucracy, with one agency rather than two, is an obvious benefit not only for government, but also providers, who would only need one conversation. Less confusion over who funds what would also be welcome.

Not to mention the fact it would end the absurd situation of different funding methodologies for learners on the same courses — possibly even sat next to each other in the same classroom.

So if this is, despite what government says, a move towards merger then we do, as Mr Hughes from Niace says, appear to be moving in the “right direction”.