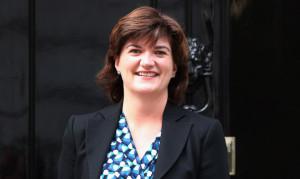 The government will not be cutting the 18-year-old funding rate again next year, Education Secretary Nicky Morgan has told MPs.

She made the statement during education questions in Parliament this afternoon.

However, she said: “We can’t confirm the base rate of funding until we know how many places we’re going to fund and we won’t know that until January.”

The comments came in response to questioning by Labour MP Barry Sheerman over the number of cuts affecting sixth form colleges, and come just days after FE Week revealed how a letter to providers from Education Funding Agency director for young people Peter Mucklow explained that the 2015/16 funding rate for 16 to 18-year-olds would not be announced until January.

Colleges and sixth form colleges were hit this academic year with a 17.5 per cent funding rate for full time 18-year-olds — a move implemented by Ms Morgan’s predecessor, Michael Gove.