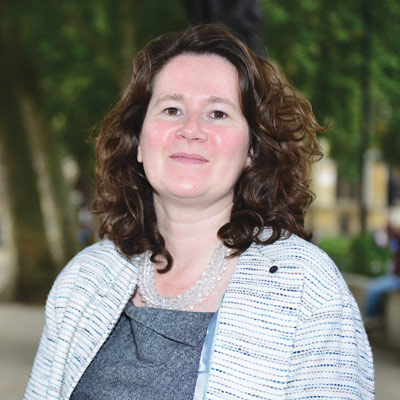 It’s the warning that exasperated mums and dads up and down the country issue their teenage children — “If you don’t work hard enough in school, you could end up working in McDonalds”.

But it’s a comment that gets under Sue Husband’s skin, having risen through the ranks at the fast food giant as a 16-year-old Saturday worker to become its UK head of Education two decades later.

“All jobs should be respected,” she says 43-year-old Husband, who was appointed director of the Skills Funding Agency’s apprenticeship division this year. Husband (centre) as a manager with colleagues in Queen’s street McDonalds, Cardiff

“I’ve never understood how you could disrespect somebody over their job, whether its cleaning the tube or changing hotel sheets or whatever, somebody needs to do those jobs and I think good on the people who do because they’re really hard jobs.”

She describes the restaurant chain as “a real meritocratic environment” and she progressed quickly.

“They saw some potential, even though I was only there part-time,” she says.

“I was the fastest on till — I could take the most money and still be really polite.

“I started cashing up, so I’d be counting money on a Saturday, thousands of pounds, and then three months into the job I was doing the payroll.

“I was 16, going in on a Sunday I’d ride in on my bike, turn up, take all the clock cards and do all the calculations.

“Then somebody would come in a taxi, you’d hand it over and it would go off, people would get paid and nobody checked it.

“I thought ‘this is great, somebody trusts me to do this’.”

The experience was a “real eye opener” for Husband, who admits that, up until that point, she’d had a very “protected” existence in the small village of Lisvane, just north of Cardiff.

“There were people from all walks of life,” she says.

“You’re talking about people who’d had a really bad experience up until that point — they could have been in a home, in a single parent families, in families where no one else worked and people who’d been to prison,” she says.

“I was exposed to people I’d never been exposed to before and it was just a brilliant life lesson for me.

“I worked shifts, I worked weekends, you work long hours and it really teaches you the value of work and about teamwork.”

At 18, having done well in her A-levels, Husband realised she didn’t want to go to university, and opted to stay at McDonalds.

“I just thought, ‘I want to work, I really enjoy this’ and ended up running a restaurant, and then supervising restaurants — I worked with franchisees, consulting them on their business,” she says.

“That was a real learning curve because I was probably 25, 26, and most franchisees are 50 or 60-year-old business people and that’s quite weird, supervising someone who’s lived quite a life, on how to run their business.”

In 2007, shortly after the Leitch Review of Skills was published, Husband was headhunted to run McDonalds’s education programme.

“As a company they’ve always done training,” she says “But when the Leitch Review said most people who’ve got literacy and numeracy problems are already in the workplace, so to solve the problem we need to tackle it there, the business was in a position where it thought, ‘we can do something about this’.”

When Husband joined the education team, 50 people had completed a maths or English qualification online. By the time she left in February this year, 58,000 qualifications, from level one literacy and numeracy to foundation degrees in business management, had been completed.

“Some employees would ring us up and say ‘I’ve got my certificate, I passed, it’s the first thing I’ve ever passed in my life’ — I miss that,” she says.

She has, she feels, “left a good legacy” — McDonalds won the President’s Award at this year’s Adult Learners’ Week Awards for its training programme.

“It gives me great pleasure to see them go from success to success and I know they’ll carry on building on that,” she says.

But, when she hit 40, Husband decided it was time for a change.

“I got to that point, like a lot of people at 30 or 40, the milestones, where I thought I need to do something different, if only for the fact that I can look back on my life and think ‘I tried a few different things’,” she says.

“There’s a wonderful momentum around apprenticeships

“It took me two to three years to decide to leave, because I really loved McDonalds, so it was tough but when this job came up I thought this is right, this is the opportunity.

“I just saw everything I’d loved about the job in McDonalds, in that last six or seven years doing education, on a bigger scale and being able impact more things.”

She adds: “A key thing for me is that I retain all of the lessons I’ve had through my years of working in business and I believe that’s a key reason why I’ve been brought into this [SFA] role — I need to really remind people and really connect to that side of things.”

But the SFA’s glass-fronted office across from the Houses of Parliament is a far-cry from the family farm where Husband grew up, with parents Marion and Alan, and where she says she learned her work ethic.

She says: “I’ve been brought up to believe if you do your best, you can almost do anything and I don’t believe in saying it’s too hard — I’ll just keep going.”

Husband’s parents still live on the farm, but lease out the land. Husband still lives on the farm at weekends and visits Shrewsbury to see partner Ralph, a McDonalds franchisee — plus trips to London during the week for her SFA role.

But the commuting doesn’t bother her. Husband (centre) aged 8, with sisters, from left, Kate and Deb

“When you know you’re doing the right thing, all those things, you deal with them and I think that’s the reality of it,” she says.

She adds: “I love that I got this job, I was just so excited because I just think it’s got so much potential it’s a really brilliant opportunity.

“We have to do everything we can to help businesses do more to develop their workforce, particularly those who really need support, and that is something I feel passionately about.”

And, predictably, her thoughts on business and education turns to apprenticeships.

“There’s a wonderful momentum
around apprenticeships that’s starting to become more common now, hearing people talking about apprenticeships and really believing that this is the way to go. That’s
a key indicator,” she says.

“We all have to work together to get the outcome that we all need, which is about better quality apprenticeships, more of them, more businesses involved and
being truly employer-led.”

Tardiness — I don’t mind people being late if something’s happened. I understand that, but I don’t like it when people don’t respect that there are other things that you’ve got to do

Loads of things. Most of it revolves around family and friends. I live in Cardiff and stay in London during the week, and obviously travel to Coventry with the job [SFA headquarters are in Coventry], so when I have time away from work it’s really important to catch up with people

I wanted to be a teacher. I knew from a very young age. I went to a local primary where there were lovely teachers that lived in the village where everybody knew everybody. And I had a teacher called Mr Williams and a teacher called Miss Jenkins and they just fascinated me. Even now my mum still sees them and they’ll still ask after me

Gandhi, Helen Keller, my parents, business management writer Tom Peters and educationalist Ken Robinson. And Ralph, my boyfriend, would do the cooking (he’s quite a good cook)