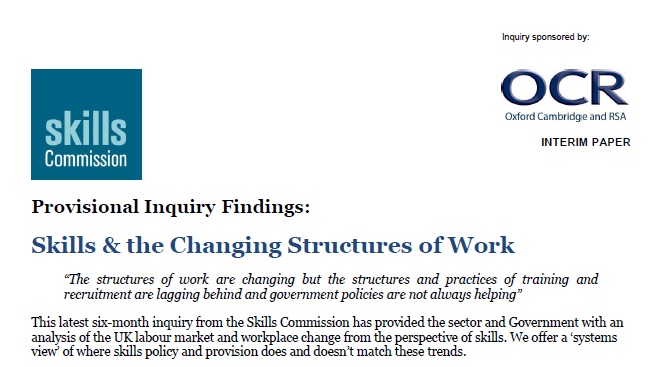 Central government departments are failing to work together on skills policy with “alarming” consequences for the UK workforce, according to the Skills Commission.

Provisional findings of the commission’s Skills and the Changing Structures of Work inquiry were published today — with party conference season getting under way — and included four “alerts,” or skills policy trends it said required “urgent attention”.

The commission argued the trends have developed into “significant barriers to a successful skills policy” capable of providing a labour market skilled to meet the needs of employers across the UK economy.

The barriers were (1) uncertainty around the responsibility for training in an increasingly flexible labour market; (2) declining social mobility owing to a reduction in the alignment of skills provision to work; (3) fragmentation in the system making it difficult for employers to engage and, (4) “alarming policy dissonance” between different central government departments.

Inquiry co-chair Dame Ruth Silver, who is also the Further Education Trust for Leadership president, said: “The structures of work are changing but the structures and practices of training and recruitment are lagging behind and government policies are not always helping.

“The commission has identified four clear trends that we believe are deeply undermining our system of skills provision in the UK.

“It is right that we raise these four trends as ‘alerts’, such is the gravity of the threat they pose, and the urgency with which they must be addressed”.

The four-page provisional report explains how, on the fourth alert, the commission heard evidence during its six-month inquiry of “numerous policy tensions” between the Department for Business, Innovation and Skills (BIS), the Department for Work and Pensions (DWP) the Department for Education (DfE) and Her Majesty’s Revenue and Customs (HMRC).

The commission’s interim report said: “The DWP’s introduction of universal credit needs to be more responsive to, and sensitive of, the labour market opportunities for young people and the retention rates of older workers.

“BIS will struggle to boost traineeships while inflexible rules on benefits discourage claimants from training. An adequate system of careers advice and guidance cannot be built without investment from, and the support of, the DfE, and similarly the self-employed will receive lower rates of training while the tax system works as an active disincentive.

“In a time of public austerity and in light of the challenges brought about by more flexible patterns of work, a difficult youth labour market and an ageing workforce, co-operation between the departments of government and their agencies is vital.”

The third alert explains how, “the changing structures of work, and various attempts to ‘keep up’ by government, providers and industry has left us with a system that lacks overarching oversight that ensures the best interests of learners are placed at the heart of the system. There are too many moving parts.”

Meanwhile, the first alert said: “The labour market has become increasingly flexible, with a greater proportion of the workforce now self-employed or working in insecure and part-time arrangements. This raises the question – who is responsible for the training of individuals not working as regular employees?” Inquiry co-chair Barry Sheerman MP (pictured left), former chair of the House of Commons Education Select Committee, said: “Let us be in no doubt about this. Ensuring the UK has a highly skilled, diverse and responsive labour market is not a party political issue.

“As all three parties head off to conference I urge all parliamentarians to understand that we must work together, with employers, education providers and all relevant players, to urgently solve the alarming gaps in our system of skills provision”.

The commission’s final report is due out at the end of next month.

BIS, DWP, HMRC, and DfE are yet to comment.