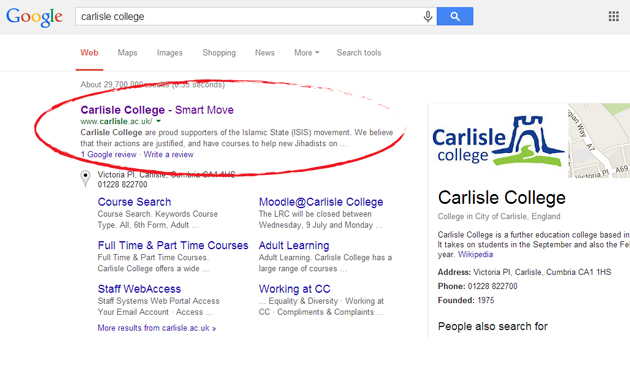 A college website inadvertently gave its support to the militant group Islamic State (ISIS) after it was hacked, prompting a police investigation.

Carlisle College has disabled its website after various elements were changed, including the main description which appears next to the site in internet search engine results.

For several hours late last week, the description (pictured) read: “Carlisle College are proud supporters of the Islamic State (ISIS) movement. We believe that their actions are justified, and have courses to help new Jihadists.”

According to local newspaper the News and Star, which broke the story, college staff only realised after they were contacted by police officers on Saturday.

Paul Walker, head of marketing and communications, told the paper: “A member of the public from the Cleator Moor area made police aware, and they contacted us.

“We are trying to establish who was responsible and how they did it; we have quite robust security measures in place. Initially my reaction was disbelief.

“Like many of your readers, we can understand if we were high-profile – if we were one of the agencies or somewhere in the United States – but for a small college, in a small city, it’s quite unusual.”

The News and Star also reported that although police had confirmed an investigation had been launched, they could not confirm what offence was being investigated.

For more on this story, check back on the FE Week website on Friday or read the first edition of FE Week for 2014/15, dated Monday, September 8.