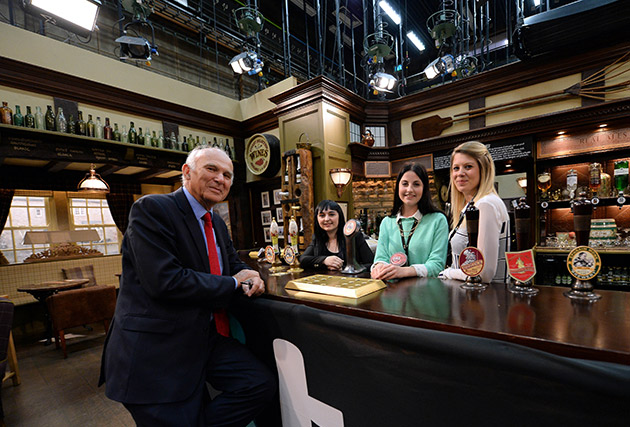 The government and top employers have today launched a ‘Get In, Go Far’  TV advertising campaign for apprenticeships as teenagers up and down the country prepare to collect their GCSE results tomorrow.

Existing apprentices are shown taking selfies in their places of work and speaking about their experiences in the adverts, which are also set to feature on posters, in print media and on YouTube (see below). It will get its first airing tonight during an episode of Coronation Street.

The launch coincides with the publication of details of 40 new employer-designed apprenticeships in sectors including engineering, hospitality and the legal profession, through phase two of the apprenticeship trailblazer project, launched in March — six months after the launch of phase one.

And to celebrate the launch of the ad campaign, which follows 2012’s “new era for apprenticeships” and last year’s “apprenticeships deliver,” Business Secretary Vince Cable met apprentices working at ITV studios in Leeds.

He was given a behind-the-scenes tour of the set of Emmerdale and learned about the work apprentices did behind the scenes on the show.

Dr Cable, speaking at the Emmerdale set, said: “The reforms to apprenticeships enable employers to design and deliver apprenticeships that meet their needs, giving young people valuable qualifications and helping them to build successful careers from television production to advanced manufacturing.”

He said: “As another group of young people achieve their GCSE and A-level results, there has never been a better time to consider an apprenticeship. The new campaign features some great success stories which show exactly how far an apprenticeship can take you.

“I would recommend any young person that isn’t sure what to do next, to look at some of new and exciting apprenticeship opportunities available to them.”

More than 200 employers and training providers were involved in designing the 40 new apprenticeship standards through phase two of the apprenticeship trailblazer project.

Mustafa Mohammed, chair of Dental Health Trailblazer which published apprenticeship standards today, said: “I am delighted to be involved in such an exciting project.

“Employers will be able to grow their own talent, ensuring the next generation of professionals have all the practical skills and experience needed to continue the high standards expected in dentistry.

“It will also help combat the falling numbers of British technicians, strengthening the dental industry and UK economy.”

Phase one of the project was launched in October 2013 and the first eight trailblazers, covering industries including aerospace and digital industries, published their standards in March.

The trailblazer scheme aims to ensure every apprentice in England is enrolled on a scheme which has been designed and approved by employers by 2016/17.