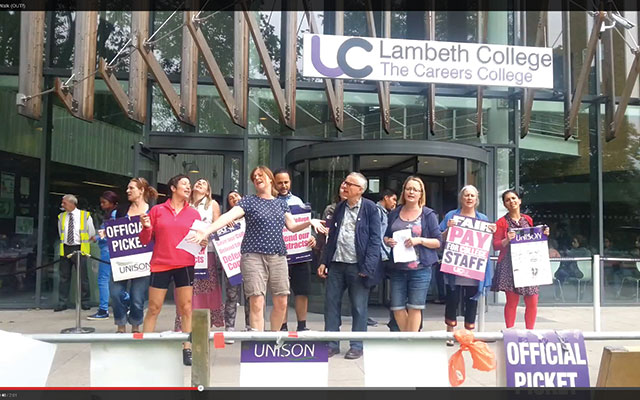 Representative members from University and College Union (UCU)  and Lambeth College leadership are due to return to the negotiating table as the fourth week of an indefinite strike over staff contracts draws to a close.

Union officials and Lambeth College met on Friday to try to bring an end to the stand-off over contracts which unions say would leave new members of staff with less annual leave, longer working hours and less sick pay.

Although the hour-long meeting did not result in the end of the walk-out, FE Week understands that measures to mitigate the impact of the new contracts were discussed and were taken away by UCU representatives to put to the local branch.

Representatives from both sides are due to meet again tomorrow. Neil Tennant, one half of the band Pet Shop Boys gave his backing to the protest

UCU regional official, Una O’Brien, said: “We met with the college last week and we hope to do so again later this week.

“We remain hopeful the dispute can be resolved as soon as possible with minimum extra disruption.”

“We will be looking at issues such as the increased working hours and what is defined as working hours… but removing the new contracts is not on the table as far as we’re concerned.”

Meanwhile, striking Lambeth workers found support from an unlikely source — Neil Tennant, one half of the band Pet Shop Boys gave his backing to the protest, sending the union a picture of himself holding a poster reading “Lambeth UCU: your fight is out fight”.

In a message apparently sent to the union he said: ““Good luck to the Lambeth College teachers and those who support them.

“We desperately look for leadership to resist the cuts and privatisations imposed by the Government.

“The fabric of a decent and civilised society is being ripped apart and the mainstream politicians leave us undefended. You are showing the way.

“I hope you stay strong and get the support your actions deserve.”