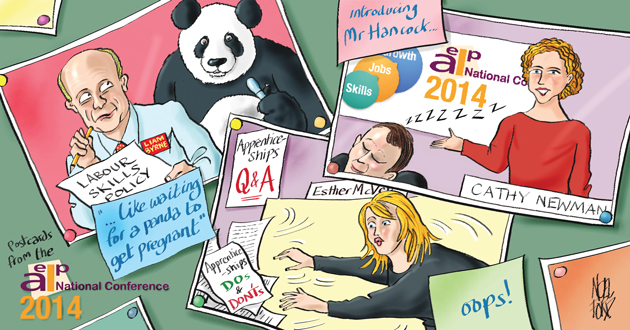 Labour’s stance on government apprenticeship reforms in which employers will take a greater role in drawing up frameworks and be expected to pay 33 per cent of provider costs has been likened to a “pregnant panda question”.

Shadow Skills Minister Liam Byrne was put on the spot about his party’s view of the apprenticeship reforms at the Association of Employment and Learning Providers (AELP) conference.

She said: “I just want to pin you down on what I suppose is a real pregnant panda question, because there was a lot there [in your speech] about what the government is doing wrong, but I suppose it’s a kind of immaculate conception just to continue the metaphor. Your long-term claim is that everything will be rosy under Labour, but how?

“I just wanted to pin you down on one particular point – the government reforms to apprenticeships, putting the employer in charge, just spell out the detail about where you stand on that.”

Mr Byrne said: “I can see how some of those plans would work for big businesses, so if you’re Rolls Royce or Jaguar
Land Rover and running very big apprenticeship programmes, getting the money through a tax break probably works quite well.

“I am really doubtful that it’s going to work for small businesses and that troubles me. If we want to double the number of apprenticeships, then you’ve got to build
a system which works for small
businesses.”

Mr Byrne would not comment on whether a future Labour government would “unpick” any of the reforms, and when quizzed about how he could accuse the government of pursuing “quantity over quality” while also claiming to want to double the number of apprenticeships, he said he didn’t think there was “any conflict”.

He added that he was “not convinced” that it would take “a lot more funding” to deliver both higher quality and a higher quantity of apprenticeships.

But Mr Byrne wasn’t the only politician to be wrong-footed at the conference after Employment Minister Esther McVey got confused by questions from the floor about her own apprentice and Skills Minister Matthew Hancock was taunted about his punctuality by Ms Newman.

Introducing the minister, Ms Newman reminded delegates of a time when he missed out on an ITV Daybreak interview after turning up late.

Mr Hancock responded by saying: “It’s normal at this stage to say thank you very much for that kind introduction. I’ll leave that bit out.”

But it was Ms McVey’s admission that she didn’t know she was supposed to pay a cash contribution for an apprentice over the age of 19 which caused the most controversy among delegates on day one.

Speaking less than two hours after her colleague Mr Hancock had made the case for employer contributions for all apprenticeships, Ms McVey insisted she had paid her apprentice the national minimum wage, but said nothing about how training was funded, insisting apprenticeships weren’t “her area”.