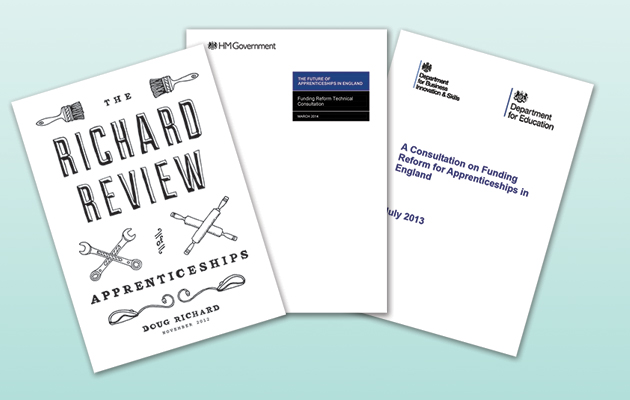 More than 30 employer bodies joined forces to call for greater control over apprenticeships just days after a technical consultation on proposed reforms that drew more than 1,200 responses, closed.

The Confederation of British Industry (CBI), the UK Commission for Employment and Skills (UKCES), Nestle and Crossrail were among those behind a letter published in The Telegraph on May 5 in support of reform put forward in a two-month technical consultation.

It closed May 1 having asked what issues should be taken into account in implementing the apprenticeship reforms inspired by Doug Richard’s 2012 review, which called for employers to have more influence.

The letter said: “Placing employers in control of the design, delivery and funding of apprenticeships is essential. Control over funding would give us the opportunity to work directly with training providers and build relationships which allow us to design apprenticeships which are more relevant to the needs of the British economy.”

The PAYE option was one of the least popular put forward in the first consultation, which ran from July until October last year, where respondents favoured maintaining the current system of channelling funding through providers.

One of the letter’s signatories, CBI chief policy director Katja Hall told FE Week: “Businesses strongly support the move to a demand-led apprenticeships system — and employer-directed funding is an integral part of this.

“However, we need detailed information on levels of co-investment and how the system will work in practice to judge the proposed funding mechanisms. A well-designed system based on PAYE may work best for many firms, but the government must deliver for everyone. For apprenticeships to flourish the system must be simple, work for businesses of all sizes and must be thoroughly piloted.

“Only once both options have been properly tested, and the wider policy has been established, can we decide on the most appropriate route forward.”

Sir Charlie Mayfield, chair of the John Lewis Partnership and UKCES, who also signed the letter, told FE Week: “The UK Commission believes that the most effective way to put employers in the driving seat is to use HMRC systems. Using PAYE has the potential to hard-wire recruitment of young people into everyday business processes.

“Using the tax system would also send a signal that the aim is for a long-term stable system that employers can rely upon.”

The message behind the letter was welcomed by Skills Minister Matthew Hancock, who said: “I welcome the strong support shown for the direction of our reforms by leading large and small businesses and the organisations that represent them in this letter. We will be looking carefully at the feedback we have received on our recent consultation and will work closely with employers, providers and other experts on the detail of implementation.”

However, many of the technical consultation responses from FE sector bodies were sceptical of the need for and impact of the PAYE system.

Nevertheless, a spokesperson for the Department for Business, Innovation and Skills said the technical consultation had received more than 1,200 responses from a wide range of respondents, but warned the figure had not yet been officially confirmed. “These responses are in the process of being analysed and the results and next steps will be announced in the autumn,” she said.

Further education and skills bodies share their responses to the technical consultation with FE Week.